One thing this trip has taught us, the best way to learn about a community or area is to attend a local community event. So we’ve been doing a lot of that. Last Saturday we went to the Lakeport Sour Orange Festival. I’m sure most of you have no idea what a sour orange is. We certainly didn’t. But we soon learned. I now think they may be Seville Oranges. But here is the local story.

The round fruit has a fairly thick, rough surface and is not eaten fresh.
This citrus fruit was the only orange to be grown in Southern Europe and Arabia during the Middle Ages. The Spaniards introduced it to Florida when they settled St Augustine. They became very valuable for their commercial importance as a rootstock for the sweet orange industry. Native Americans and early settlers began to propagate them at their homesteads and eventually moved away. Leaving these hardy trees to fend for themselves in rural areas. Today you can spot them growing alone in pastures and along the road in Glades County.

The oranges have a tart juice that is used to flavour pies, breads, ice cream and other desserts. It can be used as the main flavour in recipes similar to the way key lime juice is used.


Sour oranges are still grown commercially in Spain to make marmalade in Britain, sour orange peels make candies in Puerto Rico and the Mojito of Cuba is a zesty mixture of sour orange juice, garlic and other herbs. Liqueurs such as Cointreau, Grand Marnier and Curacao are made with sour oranges.

Lakeport residents celebrate and preserve the agrihistorical significance of this once important domestic crop by holding a yearly festival where all kinds of desserts made with the sour orange are sold. In the picture below the crowd has gathered under the live oaks to bid on cakes and pies. They were pretty elaborate and one cake sold for $140. 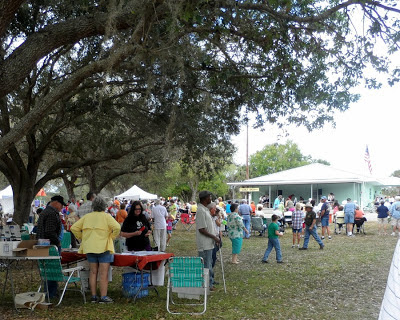 Lucky for us they were selling less elaborate version of the sour orange pie at the community centre. Everyone told us they were very good. So we purchased one to serve to our friends Dave and Kathy when they come for lunch on Monday. It tastes a lot like key lime pie. 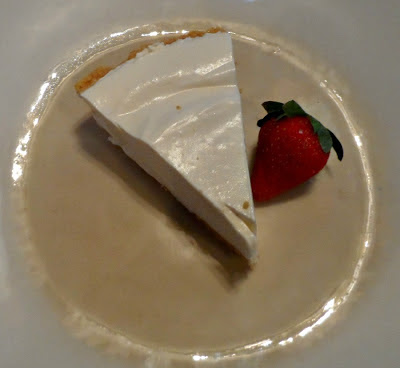 They also gave me a copy of the recipe with purchase:

1 (10-inch) prepared pastry crust, baked
1 1/2 cups sour orange juice (you could use 1/2 orange juice, 1/2 lemon juice if you can't get sour oranges.)
5 or 6 egg yolks, to make 1/2 cup
1 (14-ounce) can sweetened condensed milk
5 egg whites
1/2 teaspoon cream of tartar
1/3 cup sugar
1 tablespoon finely shredded zest of sour orange soaked in 2 tablespoons Grand Marnier, optional garnish (we didn’t get this, or the meringue, on our pie but it sounds delicious.)


Directions:
Preheat oven to 400 degrees.
Put sour orange juice in a medium saucepan. Cook over medium heat until juice is reduced by half - 3/4 cup. Remove from heat and cool.

In the bowl, beat egg yolks on high speed

In another bowl beat egg whites at high speed until soft peaks form. Add cream of tartar and beat for 1 minute to incorporate. Gradually add sugar, beating on high speed until peaks are firm and mixture is glossy. Spoon meringue over pie and twirl with spoon to make peaks.

Put pie on a baking sheet and bake in center of oven for 8 minutes, or until meringue is just browned, watching carefully to avoid burning. Remove and garnish with soaked sour orange zest, if desired.

Refrigerate until cold and firm.