According to the US Census Bureau the population of LaBelle is 4653. I think everyone was at the Swamp Cabbage Festival today. It was hot, crowded, interesting and a lot of fun.

On the advice of the locals we arrived at 9 am to get a good seat to watch the parade, due to start at 10 am. We found a great spot to set up our chairs here, right at the entrance to the park: 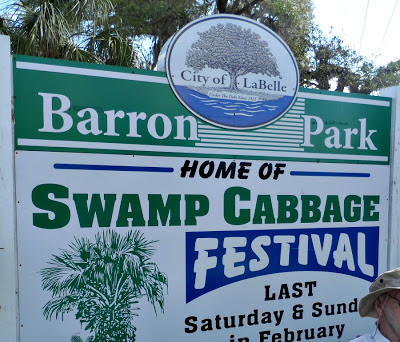 And the sign privoded a bit of shade. Necessary, as the day promised to be a hot one. We had an excellent view down the parade route. It would come to the corner where we were then turn left:

Then this happened, totally obscuring our view:

A local person sitting with us went to ask if they would move the cars. They were blocking a street already closed further up the road and therefore not really necessary. "Nope" said the policeman "the boss told us to do this".

We waited a while. Then Arch went over and asked. And offered a solution. Right up the road  being blocked was a lift bridge to let the boats on the river through. Why not just turn on the lights for the lift, or even lift the gate. "I don't know" said the policemen "we were told to put the cars here." Arch just shrugged and walked away. Then we noticed him on the phone: 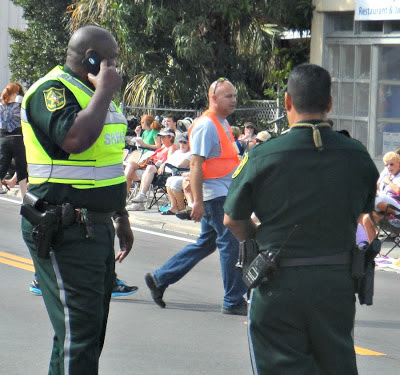 And then they got in the cars and moved them. He came over and told us he called "the boss" and told him the cars weren't necessary and to turn on the lights at the lift bridge, which they did. And we had a perfect view down the parade route: 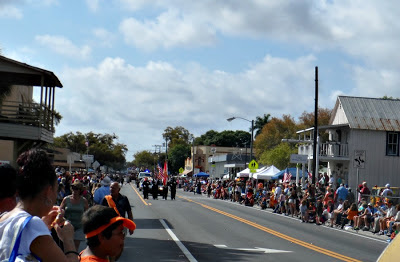 Sometimes, offering an alternative solution is all it takes.

The parade was great.

The police were showing off all their fun assets:
Motorcycle police from the local Seminole Reservation provided very casual and friendly, but effective, crowd control: There were Southern Belles - no idea why the fisherman was on this float except that fishing is huge here and they had to get it in somewhere. 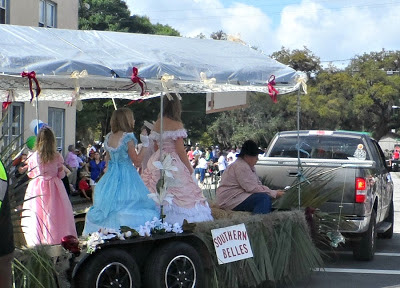 And of course the Swamp Cabbage Festival Princess and her attendants: 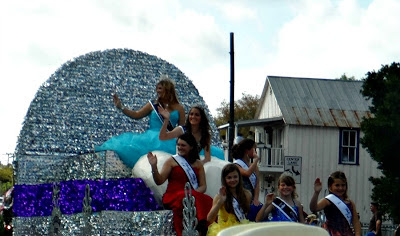 The Red Hat Ladies where there: 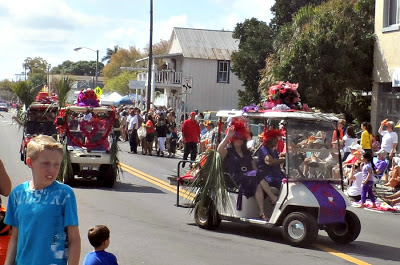 Steam equipment (boat and engine) was on display: 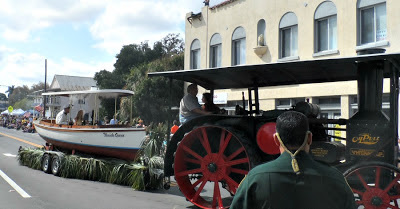 The local cockroaches (representing a pest control company) were dancing up the street: 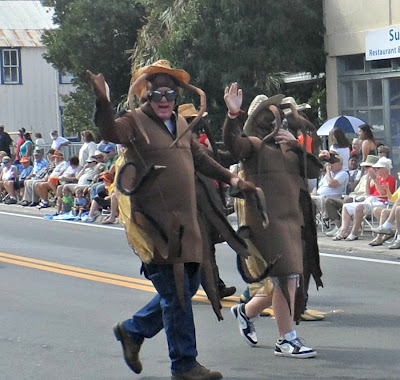 There were horseback riders doing tricks: 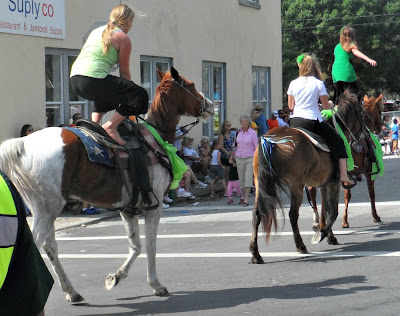 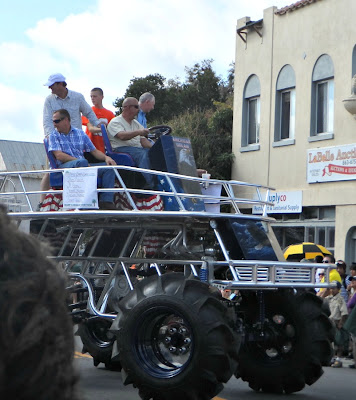 And the Bayshore Elementary School Cloggers had a great float - the best in the parade, I thought. The theme was Cloggers in Toyland. And It was pulled by a Tonka Truck: 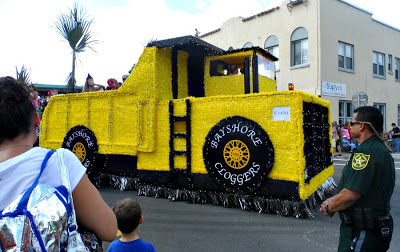 And then a huge number of toys represented on the float itself:

And bringing up the rear of the parade, a couple of Clydsdales: 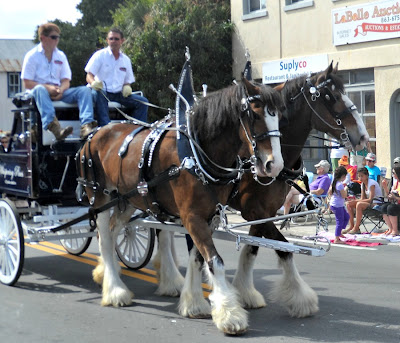 After the parade the crowd headed to the food and crafts booths. Lots and lots of food booths. First inside the park was the sweet tea seller. Sweet iced tea is the nation drink here. We have yet to develop a taste for it. 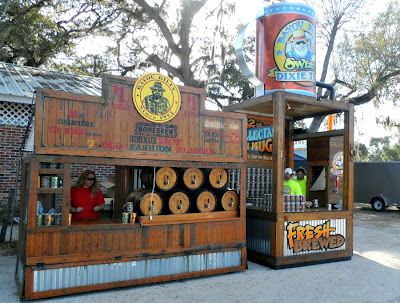 Then every kind of food you can imagine. Except fish and chips: 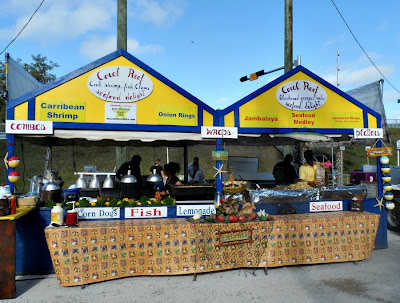 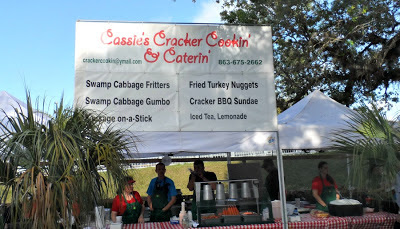 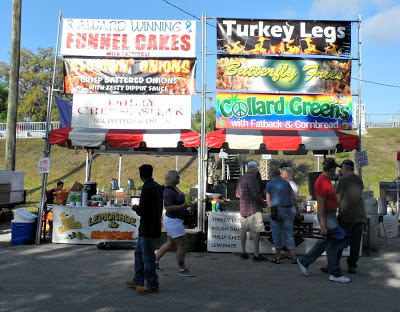 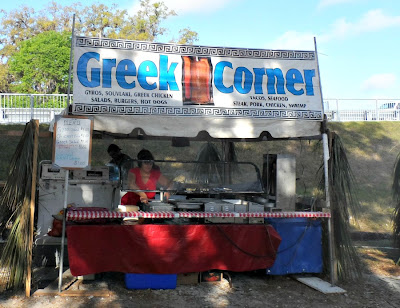 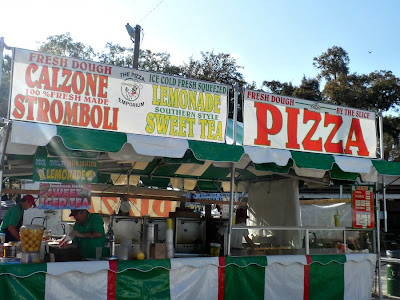 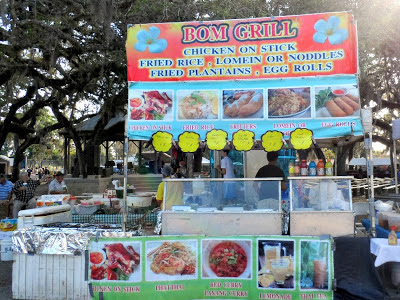 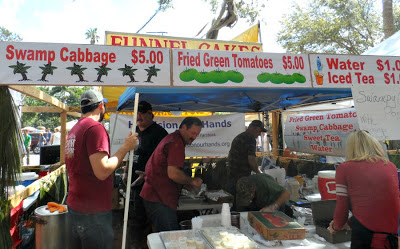 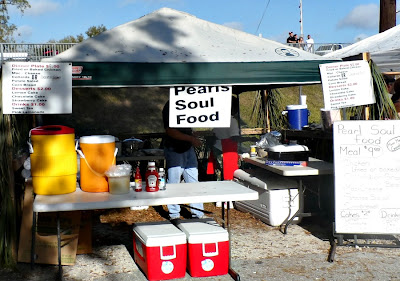 And of course dessert: 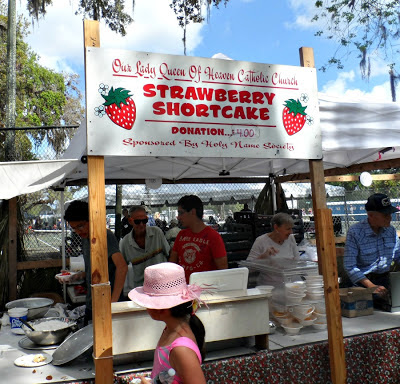 So. What is swamp cabbage? Well, thank you for asking.
Swamp cabbage is the name given to the heart of the Sabal Palm. You can buy it canned under the name "hearts of palm", which is good in salads but I've never tried to cook it from a can. 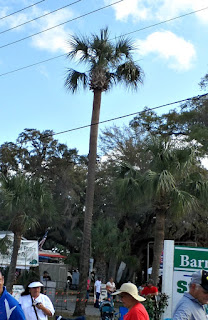 The Sabal Palm is indigenous to Florida, Alabama, Georgia, Louisiana, Mississippi, South Carolina, and coastal North Carolina. They are very common and readily available in most areas. They grow wild in such abundance that they are not cultivated as a harvest vegetable.

You can learn more and see how to cook it here. Or the Food Network website has a recipe from Bobby Flay