Another spectacular day. On this trip we drove many of America's scenic by-ways - the Blue Mountains Parkway, The Natchez Trace, The Big Sur, The Oregon Coast. But nothing, nothing more spectacular than the Icefield Parkway in Jasper and Banff National Parks in Alberta.

When we left Valemount the weather was not the greatest. Drizzly with low clouds. But we decided to push on taking the Yellowhead Highway to Jasper. We could decide there what to do next.

Mount Robson was our constant companion on this section of the drive: 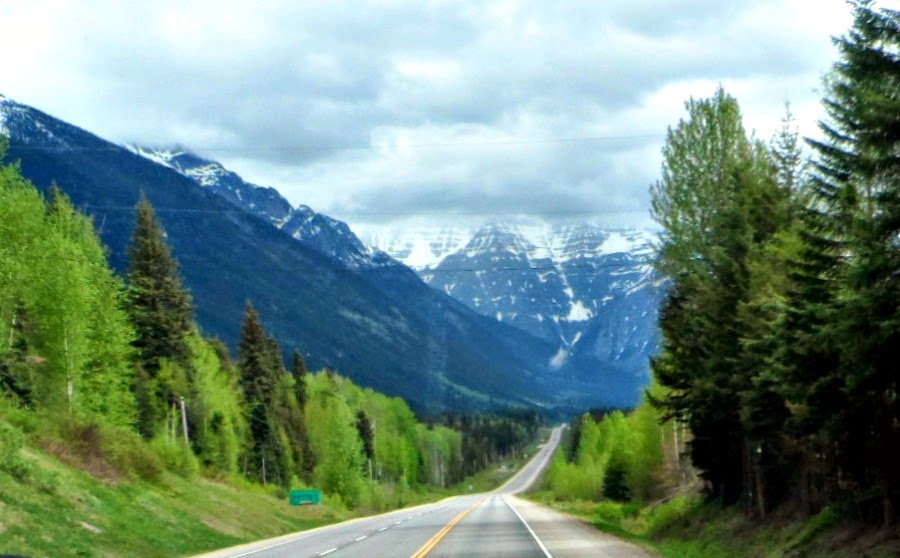 A moment of excitement when we saw several moose. Unfortunately there was a semi truck behind us and the moose were on both sides of the highway with a narrow shoulder so we could not slow down to take a photo so the one here is a little blurry 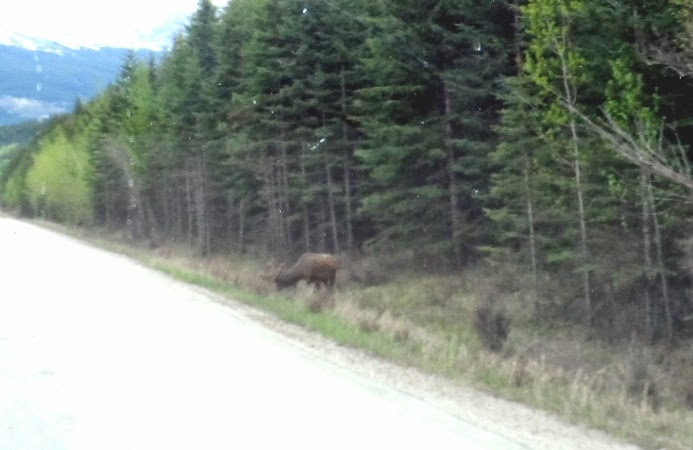 It is important to know that the Yellowhead Highway is relatively flat and the favoured route for truckers to take through the Rockies. We did not find their presence a problem (this is not the 401 between London and Toronto) but they are there. At Jasper they will continue of to Edmonton.

Jasper is your typical skiing/hiking town with lots of hotels, restaurants and sports shops. not to mention all other types of shopping. But no big box stores in sight. Its main feature is the historic train station (Jasper was developed as a railway town):

It is now a major stop for "The Canadian" a popular train with dome cars that runs from Toronto to Vancouver. It was pulling into the station as we arrived. People disembarked to spend some time in Jasper while others were enjoying coffee and waiting to board: 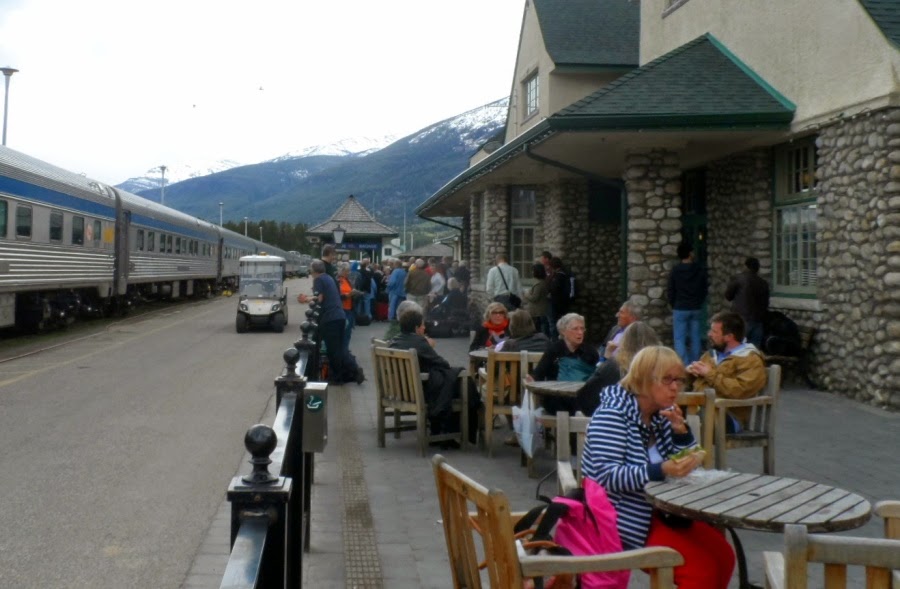 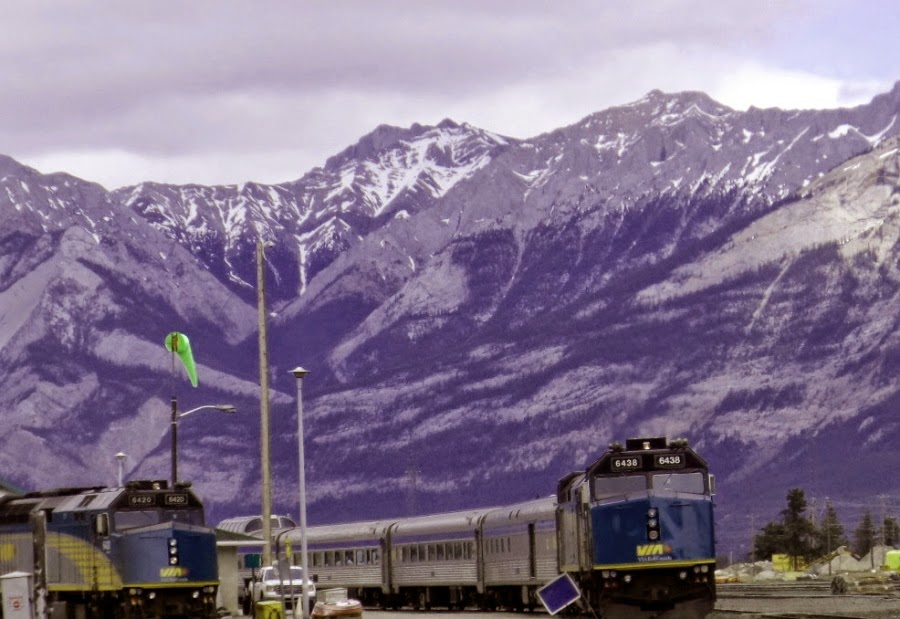 Also seen in Jasper:
After a delicious lunch at the Jasper Pizza Place - Arch said it was the best pizza ever, and believe me he eats enough of it to be an expert - we headed down the Icefield Parkway. First excitement was when we spotted a bear grazing at the edge of the highway. 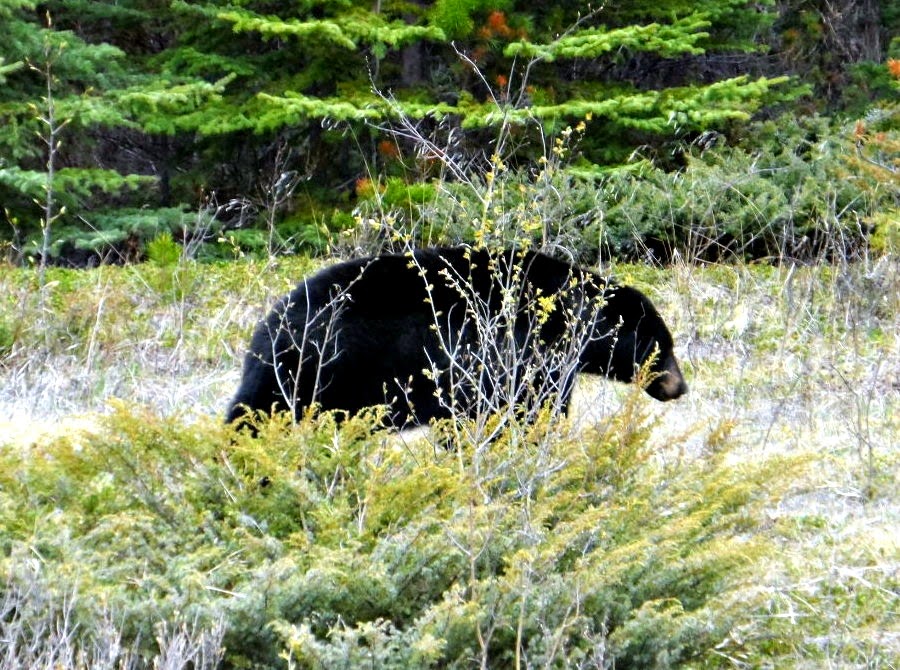 If you see any wild animal on the parkway do not, I repeat, DO NOT get out of your car. In fact the parks service asks that you do not stop the car. Simply slow down, get your photo and keep on going. People who approach the bears are a danger not only to themselves but the bears as well. There is an excellent movie at the Lake Louise Information Centre telling you how to interact with and protect yourself from the wildlife in the park. And protect the wildlife from you.

The drive down the parkway is spectacular:
There are two long high passes on the Parkway. The first is the Sunwapta:
Glass skywalks seem to be the latest tourism attraction and there is one that just opened on the Parkway, at the top of the Sunwapta Pass: We did not take the Glacier Skywalk but it appears to be much more spectacular and much more reasonably priced. And for $25 we suggest you try it.

Incidentally, Canada's Nation Parks charge a daily admittance fee or you can buy a yearly pass. At $120 for the two of us it is a little more expensive than the US National Parks pass ($80) but very much worth the money if you plan to spend more than 3 or 4 days in the parks system.

There is no parking at the Glacier Skywalk. They bus you up from the Columbia Icefield Centre. The Icefield Centre also offers dry camping spots for $15 per night. That is where we stayed for one night. If you do this be sure to get there early to get a relatively flat spot - it is on the side of the mountain.

We found a spot that was reasonably flat and had a great view of the Athabasca Glacier:

The glacier is very large. If you look carefully at the lower left corner of this picture you will see a orange spot that is circled. That is a snocat that was grooming the glacier in preparation for the many trips snow machines (large buses) make taking people up to the ice field.

It is a massive area. I took this photo of an info board at the Lake Louise Information Centre that shows the size of this ice field: 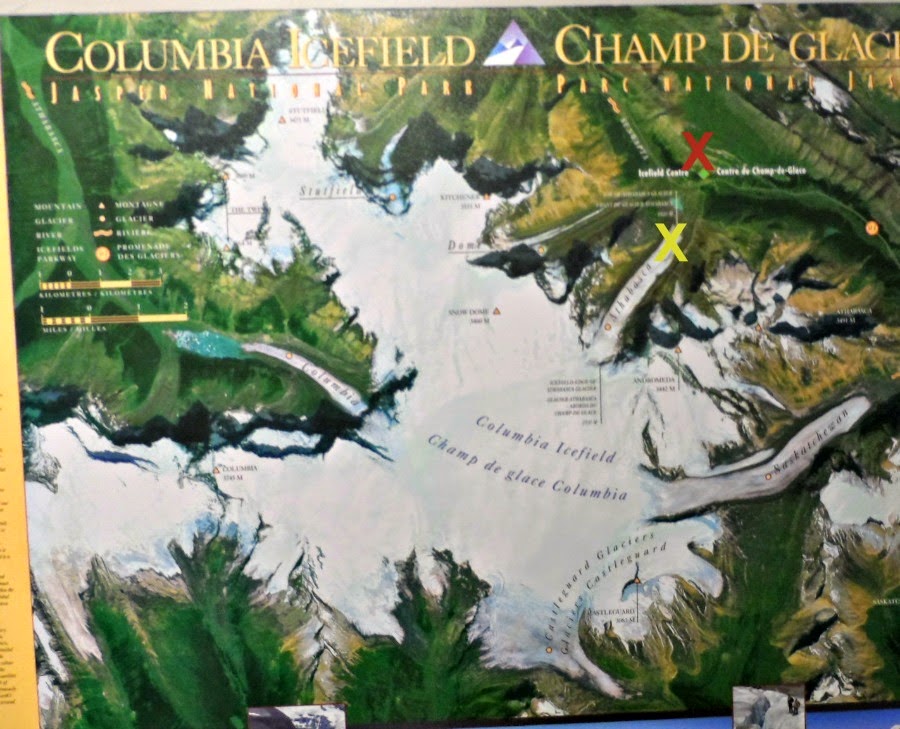 The red "X" indicates the Columbia Icefield Centre where I was when I took the picture above and the yellow "X" is the base of the Athabasca Glacier. In my picture the rest of the ice field is up and behind the mountains.

The trip down the mountain from the Icefield Centre is pretty spectacular:
The only gas station on the Parkway is located at Saskatchewan River Crossing, just as you leave Jasper National park and enter Banff National Park. DO NOT PLAN TO BUY GAS THERE. It was 1.80/litre, expensive even for Canadian prices. Gas at other spots in Alberta was about 1.23/litre so fill up in Jasper before heading down the parkway.

The Weeping Wall:
Our next big climb was to the Bow Summit:
Then more spectacular scenery into Lake Louise where the road becomes a four lane highway and the wildlife is diverted over these especially designed overpasses: 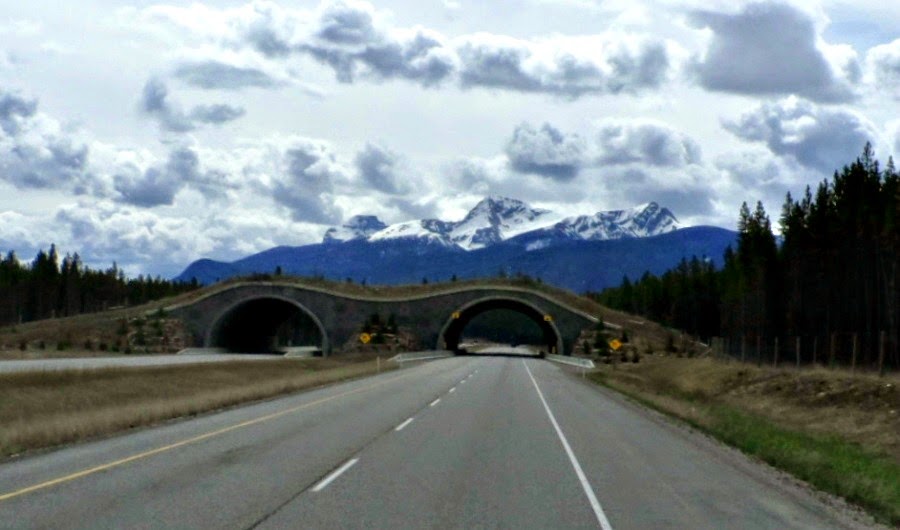 Time to Speed This Adventure up a Bit

The time has come for us to seriously point the Adventure Bus east and head home to Nova Scotia. In the past 7 months we drove about 13,000 kms and we have 6,000 kms still to go. In 7 weeks. With friends to visit and lots to see. It is time to hustle our butt a little bit. So, with a few exceptions, from now on this blog will be mostly about the drive.

We left Peachland about a week and a half ago and headed north towards Jasper. With a couple of stops along the way. We are still getting the hang of "hustling our butt".

It was a spectacular drive:

Kelowna is the Okanagan's major city - a very pleasant spot on the lake with good shopping, a beach, lots of golf clubs, wineries and orchards, etc.

North of Kelowna we drove by a number of lakes 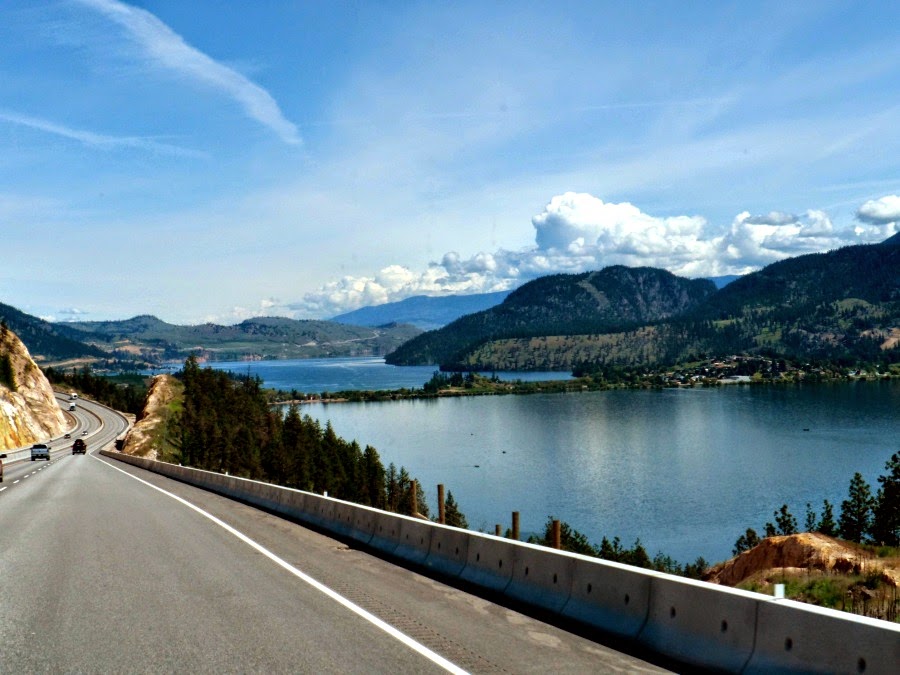 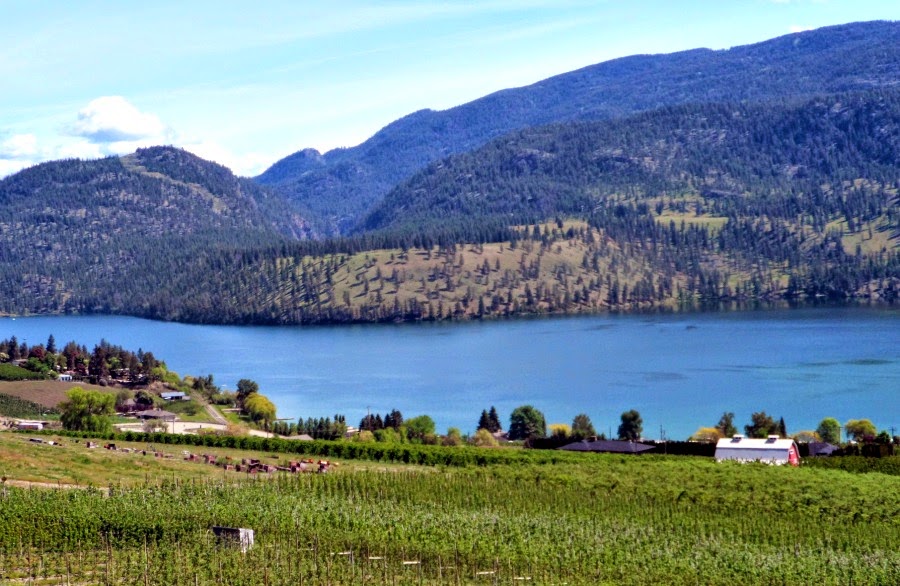 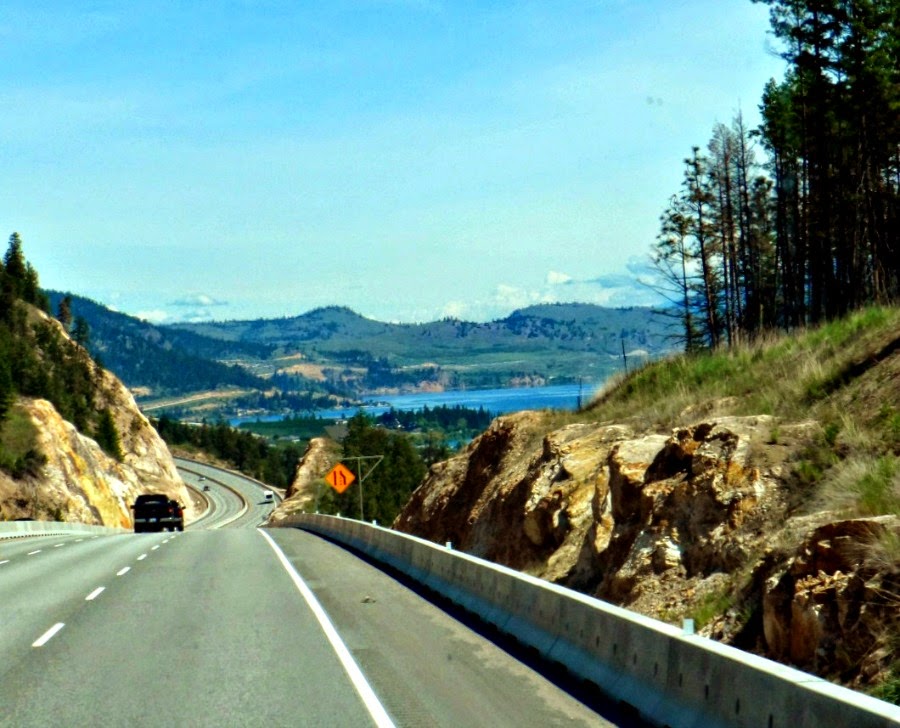 I believe Salmon Arm is officially considered the north end of the Okanagan Valley. It too is surrounded by beautiful lakes and mountains. We stopped at the Walmart parking lot to make our lunch. Easy in and out.
We went around Kamaloops and pointed the car straight north on the Yellowhead Highway (rte 5)
,

That night we stayed at the Chinook Golf and RV Park in Barriere, BC. A beautiful spot with a great little golf course that ran along the side of the mountain. So naturally we had to stay an extra day to give it a go.
The next day we entered the land of the big bears 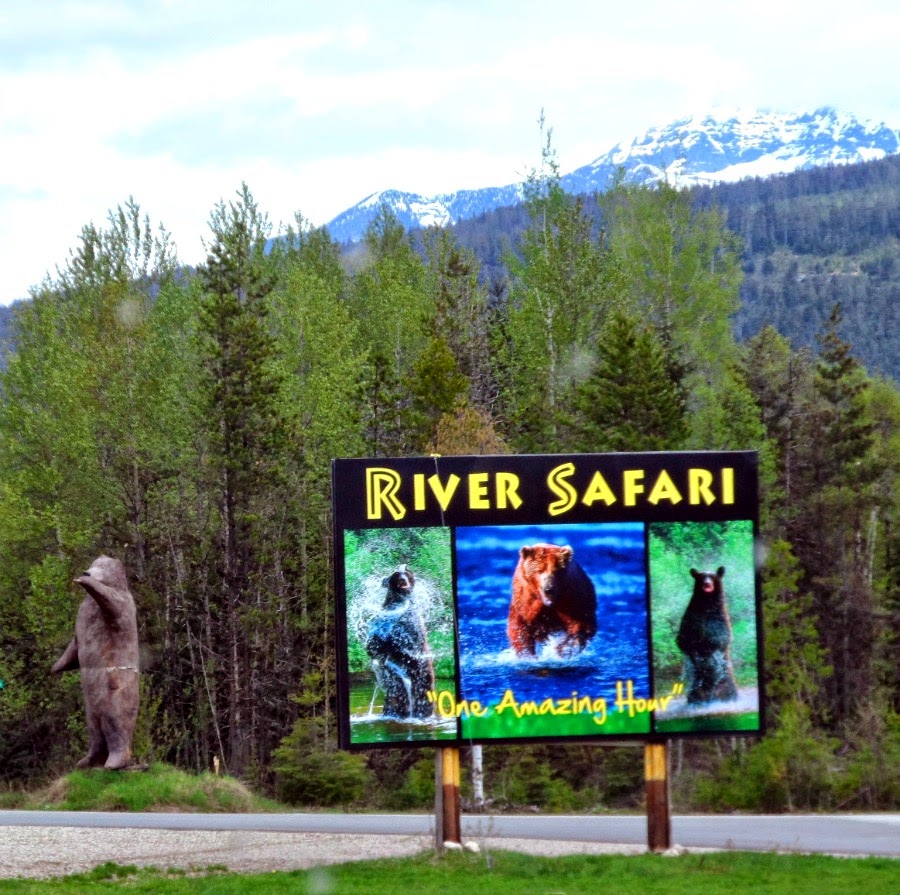 And we pushed on to Valemount BC. The gateway to Jasper National Park. We did not see any bears, basically just rocks, trees and the river.

Next post will be about our drive down the Icefield Parkway in Jasper and Banff National Parks.