On the Sunday of Thanksgiving weekend we enjoyed a great turkey dinner with sister-in-law Lesley and her children and grandchildren: 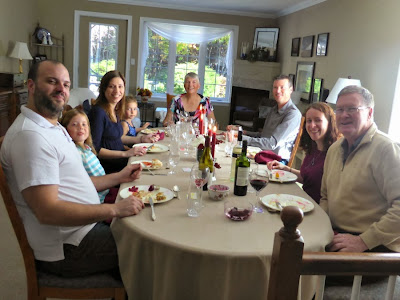 Then, on Thanksgiving Day, a family hike.

Polly Cove is a spot near Peggy's Cove, Nova Scotia, few people know about. It has always been our go to spot for a challenging and rewarding hike and on Thanksgiving Day we set out to introduce it to some of our family members.

This is a beautiful area of Nova Scotia so I am including lots of photos. To enlarge the photos simply left click on them.

While it is relatively unknown to have the place to yourself  it is always best to go early in the morning. So at 9 am we set out with 6 adults, 1 teen and 6 children. It was a glorious morning for a hike. Warm sun and a cool air temperature.

When we arrived the kids raced to the rocks:

If you hike in this area the unwritten rule is: stay on the granite or follow the already the already made paths. The terrain is very fragile and it's biggest enemy is people.

About one half a kilometer into the hike you come to this old foundation: 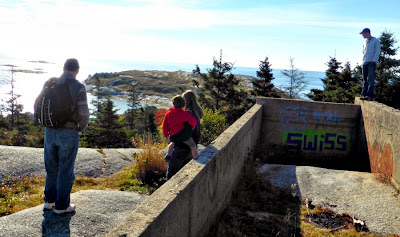 I've asked several people and no one seems to know exactly why it is there. Some say that someone started to build a house there without a permit and was stopped. Others say it was a radio post during WWII. And there is the belief that it was a lookout to watch for German submarines during the war. So, who knows.

Whatever, the view from here is spectacular: 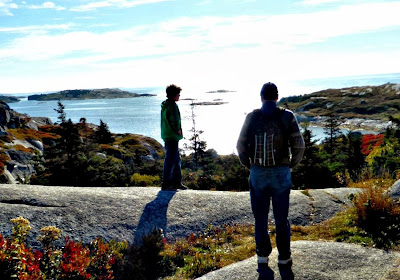 Our hike continues by scrambling down the giant boulder in front of Arch (above) and then following a trail through the low brush. But first, it has started to warm up a bit, time to start shedding some layers of clothing: 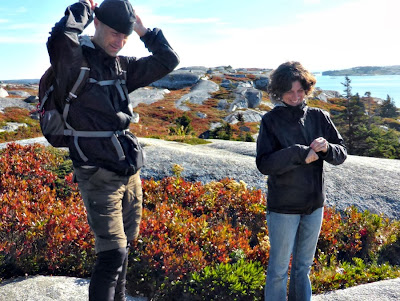 This is my niece, Rebecca and her husband, Gord. Three of the children are theirs. Behind Rebecca, you can see our destination in the distance.

But first a stop to explore and climb boulders at "the cliff". 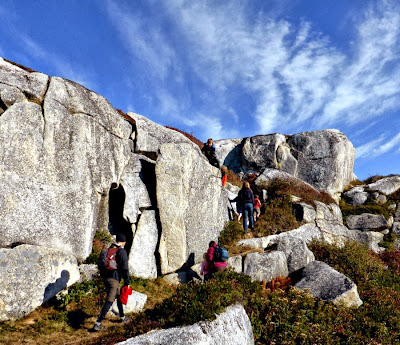 This photo will give you an idea how large the boulders are, and why we call the area the cliff: 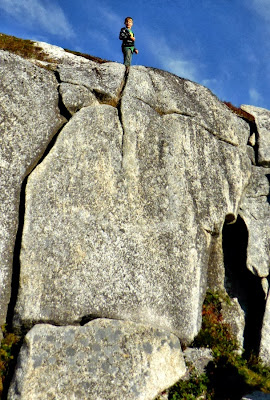 Oliver thinks he is the king of the world up there.

This is Indy. I think this falls under the category of "dogs will be dogs" 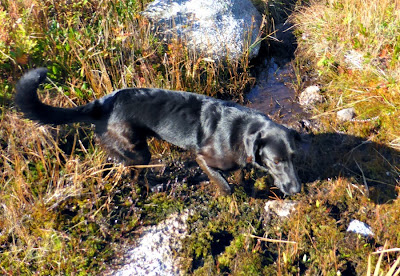 Indy was named after Indiana Jones because he is her master's favourite movie character and he had been told that the dog was a male. It was some time after she arrived before anyone thought to check and realized she was a "she".

Then it is on to find a picnic spot: 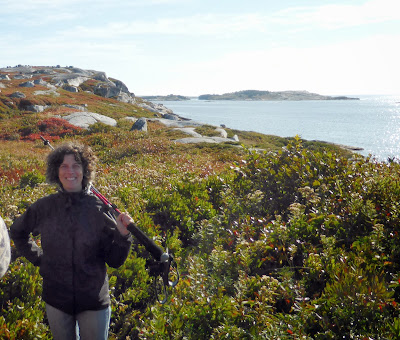 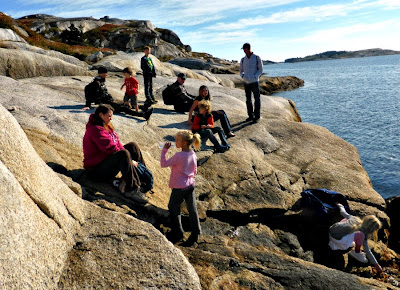 While waiting for lunch Ruby heads out to explore and finds a small waterfall: 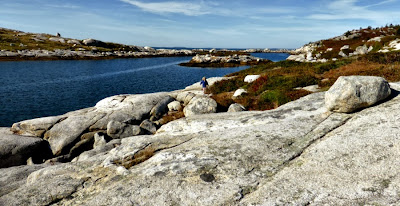 Which mom has to come and check out: 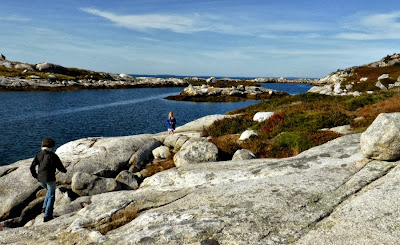 I think I better mention that the ocean is a fair distance from where we are and the kids are in no danger. Also, they spend a lot of time around the ocean and know to respect its power.

And a yummy picnic lunch was enjoyed by all: 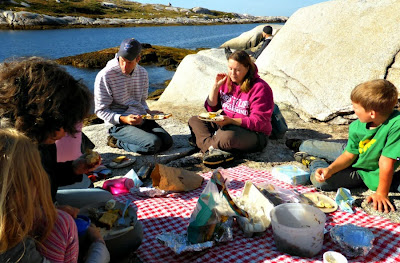 The man in the stripped sweater is my nephew Joe and beside him, his wife, Sharelyn. Four of the children are theirs.

And all together you have this motley crew: 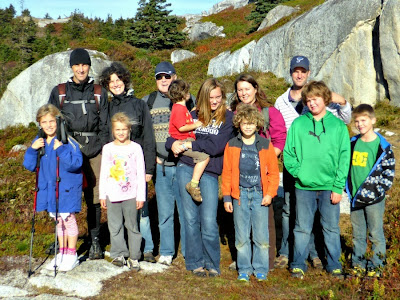 After lunch the kids and Arch went boulder climbing while some of us sat back and enjoyed the sun.

Then it was time to head back . With a brief rest stop at the foundation: 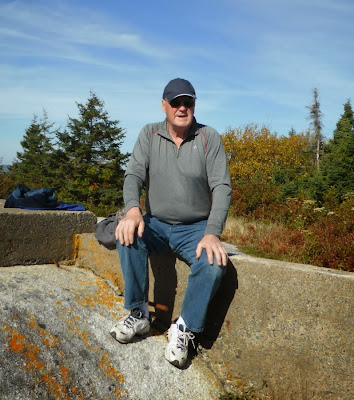 All in all it was a great wind up to a fun Thanksgiving weekend.

The Accidental RVers Take in the Fall Colours at Ski Wentworth

Weather-wise it has been one of those fall weekends you dream of. Cool nights and warm sunny days. A great weekend to go outside and have fun. So we sandwiched Thanksgiving dinner between two great hikes. One planned, one not so much.

When we left the farmers' market on Saturday we headed out to the Wentworth ski area to take the cable car to the top of the ski mountain to see the fall colours. Sounded like a great idea and it was. 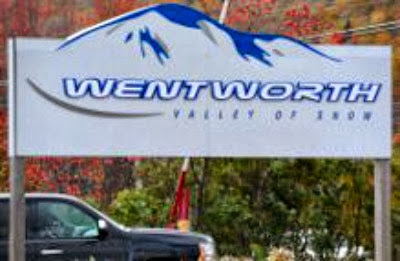 At 815 vertical feet high it is not really a very high mountain in Colorado/Alberta terms, but it is high enough to provide a great view of the surrounding area from the chair lift. Especially on the return ride to the bottom.

So we purchased a ticket and off we went.
You can see the trails on the map beside us. The trail on your left that swings way out around the mountain is called the Chickadee. This info will have significance later in this story.

We got on the chair and up we went. We noticed a few people walking down the mountain. What a good idea, we should do that sometime. 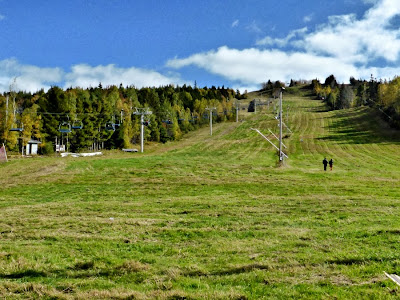 About halfway up the ride we noticed something 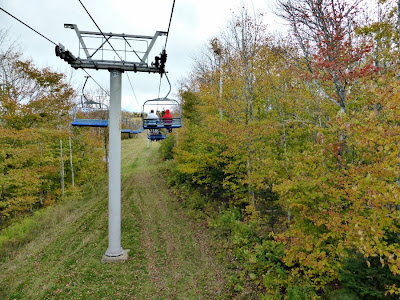 "Oh! Oh! Look Arch. There is no one coming down on the chair lift." Then it dawned on us - you are supposed to walk down.

We got off at the top and followed  the other folks heading off to walk down the mountain. You will notice behind me that we have a choice of two trails. 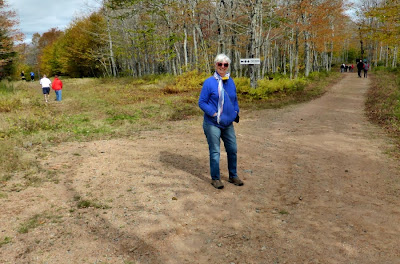 The one on your left is called Explosion and is labeled as a double black diamond. Those among you who ski will know that this is the most difficult rating for a ski trail and is usually very steep. We chose the trail on your right. 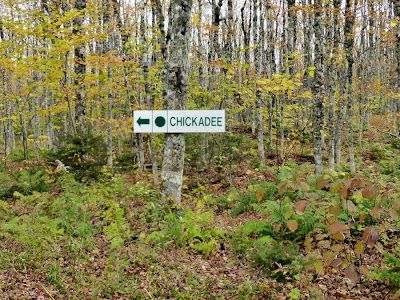 The Chickadee trail I mentioned earlier. It is rated as easy and it was. But long. Halfway down we crossed Explosion. 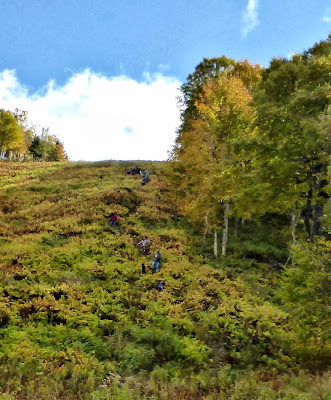 The people you see near the top were on their hands and knees (or hands and bums) crawling down the hill. It was very steep. As for us we really enjoyed our 1 hour hike to the bottom of the mountain. An unplanned but very enjoyable walk. 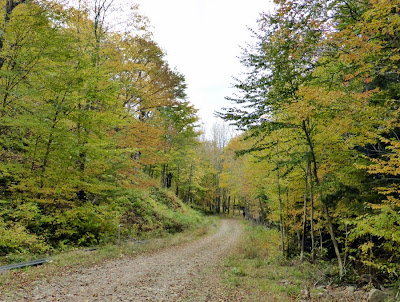 Then a small reward for a job well done. 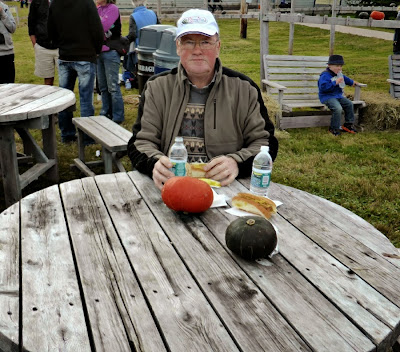 And off home, with a brief stop at the Masstown Market to pick up some goodies for our planned Thanksgiving Day hike/picnic and a bottle of good Nova Scotia wine for Thanksgiving dinner. What a crowded spot that was - I think half of Nova Scotia had the same idea.

Next post: Thanksgiving dinner and our picnic at Polly Cove.

Ten years ago, when we moved from London, Ontario to Nova Scotia to "retire", we needed to find a way to meet new people and become a part of the community where we were living.

One visit to the Hubbards Farmer's Market provided a solution. I booked a stall, baked my "famous shotbread cookies" and sold them at the market. And Arch made outdoor furniture from local maple and poplar to sell at an outdoor stall. We had a lot of fun and met a lot of people.

Eventually I expanded my line to sell breakfast wraps and focaccia and my sister-in-law, Lesley, joined me with beer breads. We then developed a catering business that morphed into Lesley's Pantry - a small food emphorium in Chester, Nova Scotia. Now closed when Lesley decided to retire this year. And Arch moved on to The Bay Hammock Company, now sold :).

The Hubbards Farmer's Market has been the centre of our spring, summer and fall Saturday mornings ever since as our family gathers to do our weekly shopping and catch up with family, friends and neighbours.

This past Saturday was the start of Canada's Thanksgiving Weekend and our first Saturday off together since Arch started Bay Hammocks 7 years ago. Or, as Arch says "the first day of the rest of our life". So we started the day with a visit to the market. It was great to catch up with neighbours and old friends.

It was a beautiful day and the fall colours were spectacular on our drive over: 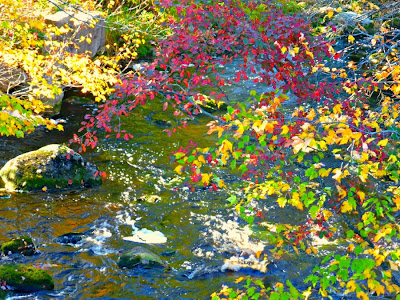 As was the selection of fall veggies for sale at the market:
I've noticed a lot of recipes for delicata squash lately but have never prepared it. So I purchased one to try.Think I will simply cut it in wedges, sprinkle with a mixture of brown sugar, butter, flour and walnuts and bake.
Did you know that the McIntoch apple originated in Dundas County, Ontario, Canada?

The little girl huddling in the blue jacket is our grand-niece. She lives near-by and threw her jacket on over her pyjamas to come shopping. Sure hope it warmed up as the day went on.

We left early to check out the fall colours in other parts of Nova Scotia. But that is a subject for another blog post......