There is a strong connection between Montreal and Canada's east coast. It is our nearest "big" city and, back in the day, the place to go for shopping, big city holidays, etc. Or maybe that was just our family. Mom grew up in Montreal, my sister Ruth lived in Montreal for 40+ years, we went to university in Montreal and it was always our first night stop when driving between London, Ontario and Nova Scotia. So once we arrived in Montreal we were home - the rest of the drive was simply a trip over familiar roads.

The purpose of our stop in Montreal was to visit with Ruth's family so we planned a family bbq party at the Adventure Bus. Not many pictures I am afraid. I was too busy visiting. But here are a couple:

Rachel is a lecturer ar LSU in Baton Rouge LA. You may remember that we dropped in on her in Baton Rouge at the beginning of this trip. She took a leave of absence to be with her mom while she was ill and was to head back to Baton Rouge at the end of the month. (Which she did).
We timed our visit to coincide with Rachel's 40th birthday and the next night Bill hosted a dinner party at the local yacht club to celebrate:
Our nephew, Jon, is engaged to marry Rivka's daughter, Amanda, next May in Nova Scotia. It will be a happy celebration we are all looking forward to. Rivka is generously allowing the aunts to participate in the wedding planning. Additionally, she voluntarily served as the family chef during Ruth's illness, preparing delicious meals and treats we all looked forward to. What a sweetheart she is!!

Jon and Amanda are both working on Phd's at universities in North Carolina. Amanda at Duke and Jon at UNC. We will see them next on our way south in November. I don't think we will see Rachel until next May.
The next morning we were up and off to our next overnight, the Walmart in Edmundston, New Brunswick.

There is much to see and do in Quebec - if you are visiting for the first time plan to spend two or three days in Montreal (the KOA south has a bus service into the city), at least 2 days in Quebec City (stay across the St Lawrence River in Levis and take the ferry back and forth to visit.). And be sure to drive around the Gaspe Peninsula - a terrific drive that doesn't receive enough attention. The province also has a terrific trail system for hikers and cyclists.

We have done all this before so we were headed straight to Moncton, NB to have some repairs done on the Adventure Bus.

We left Edmundston on a hazy morning for to drive down the beautiful St John River Valley: 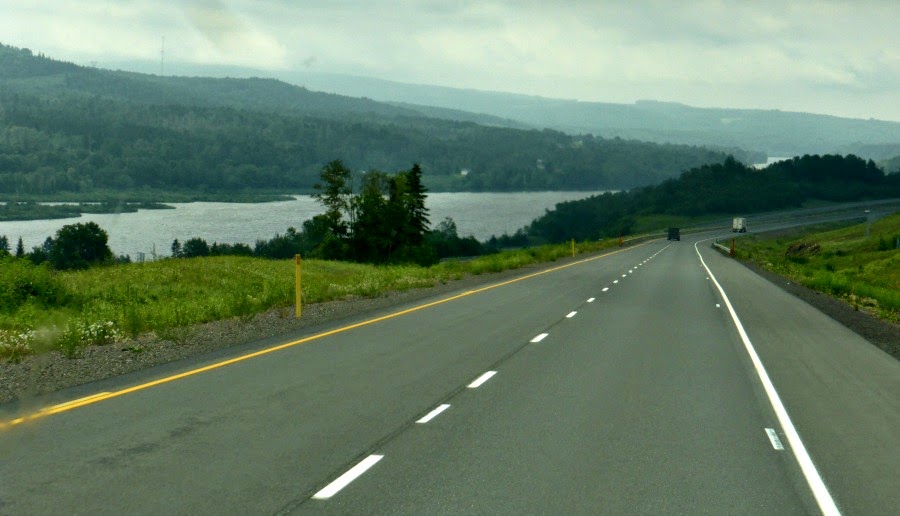 The weather cleared quickly as we drove along New Brunswick's seemingly endless section of the Trans Canada Highway.
Our next planned stop was Woodstock, New Brunswick which is just 10 kms from the USA border crossing and the Walmart at Houlton, ME. The plan was to unhook the car, drive across the border and pick up several cases of wine at the Walmart (we are allowed to import and pay taxes on 40 litres of wine per person for personal consumption.) Then we were going to spend the night at the Woodstock Walmart.
Unfortunately, we weren't able to get as much wine as we wanted (Houlton is not exactly a major metropolis) and when we got back to the Adventure Bus it was very hot out - about 30C - much too hot to spend the night without electricity (i.e. air conditioning). So we decided to drive on to Mactaquac Provincial Park near Fredericton. Not our best idea. We should have realized that something was amiss when we saw a man selling a generator at the side of the road on the way into the park. Then we saw this: 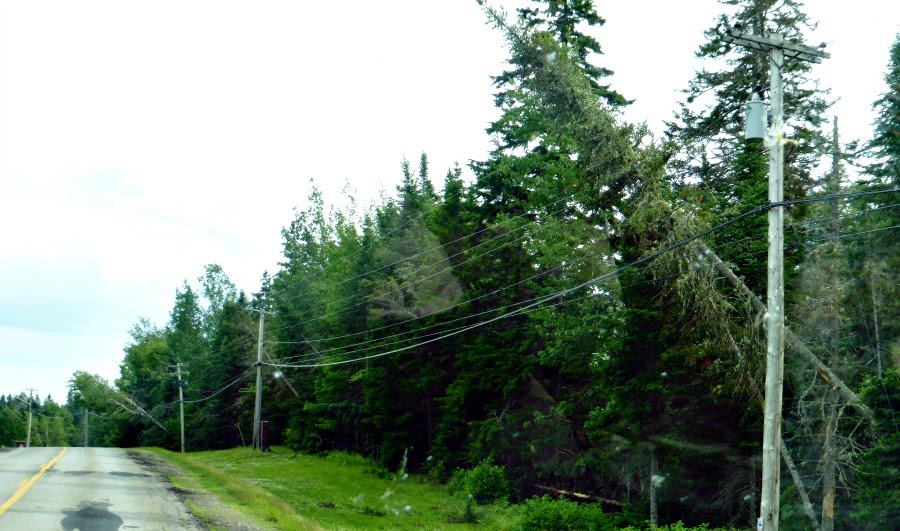 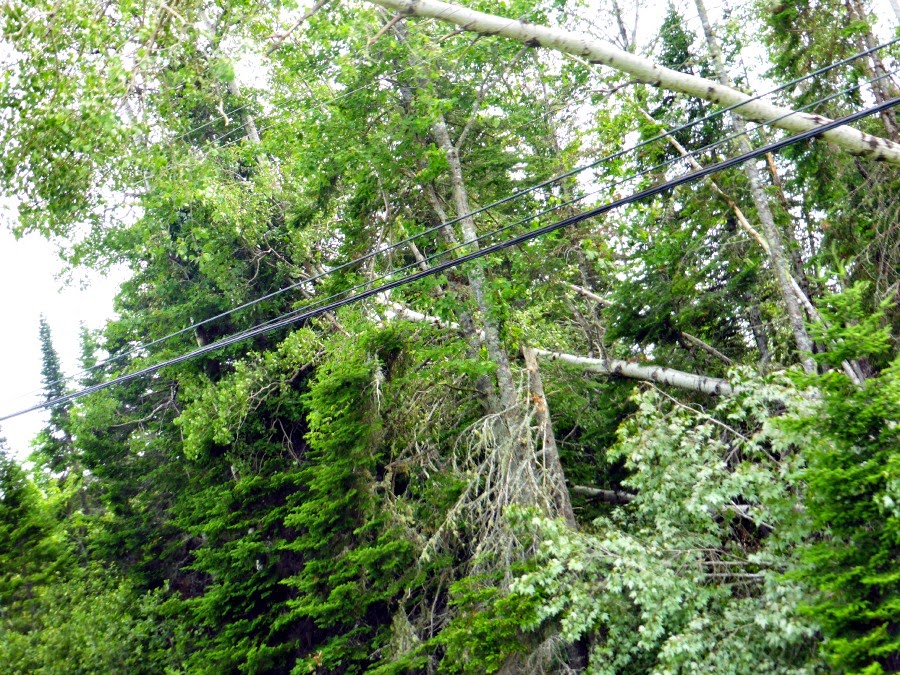 As it turned out this was storm damage from post tropical storm (aka hurricane) Arthur which blew through the week before. We had no idea the damage was so extensive and it turned out there was a whole area which still had no electrical service and had not yet seen a repair crew. They were not happy campers.

It was getting late (about 5 pm) and we had no idea where to go next so I called our friends Elaine and Rick of  E & R's Travels. They live in Riverview - 170kms away- and were our next stop after Fredericton. I was hoping they could suggest a campground close to where we were where we could spend the night. No such luck. Elaine suggested that we drive straight through to their place instead. We were frustrated, tired and the idea of doing this broke all our rules for RV driving, but after some discussion off we went. We knew that a late evening visit with them and a great RV hook up site on their property would be just the cure for a difficult day.

We spent two nights with Elaine and Rick. The plan had been to get our range oven repaired or replaced at the RV dealership where they both work but, as it turned out the part we needed was obsolete and a new range was $900+ so we decided to let it go for now and seek other solutions. Instead we enjoyed a great visit with Elaine and Rick, (thanks guys) a brief visit with my nephew David and his family who live just a few blocks down the road and then on to Truro for a two day stop at Arch's sisters and then home to St. Margaret's Bay.
And thus we ended a 16,000 km trip around North America from Halifax to the South Padre Island, to San Diego, to Vancouver, and then across Canada on the Trans Canada Highway. Not one breakdown, no crises situations (unless you count the "Car in the Imperial Sand Dunes" episode), just a great time seeing lots of interesting sights and things and meeting lots of great people. The old Adventure Bus did us good as we say in Nova Scotia.

Whats next? Well, summer and fall in Nova Scotia (more blog posts to come) then winter in Florida. After that, who knows.