Arch says driving across the Prairie is a lot like watching the water go over Niagara Falls. At first it is awe-inspiring and amazing but after about half an hour it is just boring.

We started out from Okotoks, Alberta on a beautiful, sunny day:
As we drove along we were chatting and admiring the scenery and missed a sign that said “road closed at the Bow River” so after about 50 kms we were confronted with this:
We weren't the only ones to miss the detour sign. To the right you can see a white SUV. He was trying to find a way around the detour. Eventually he turned around and came back.

So, for us, there was nothing to do but take the car off the dolly, unhook it, turn the Adventure Bus around and reconnect everything. 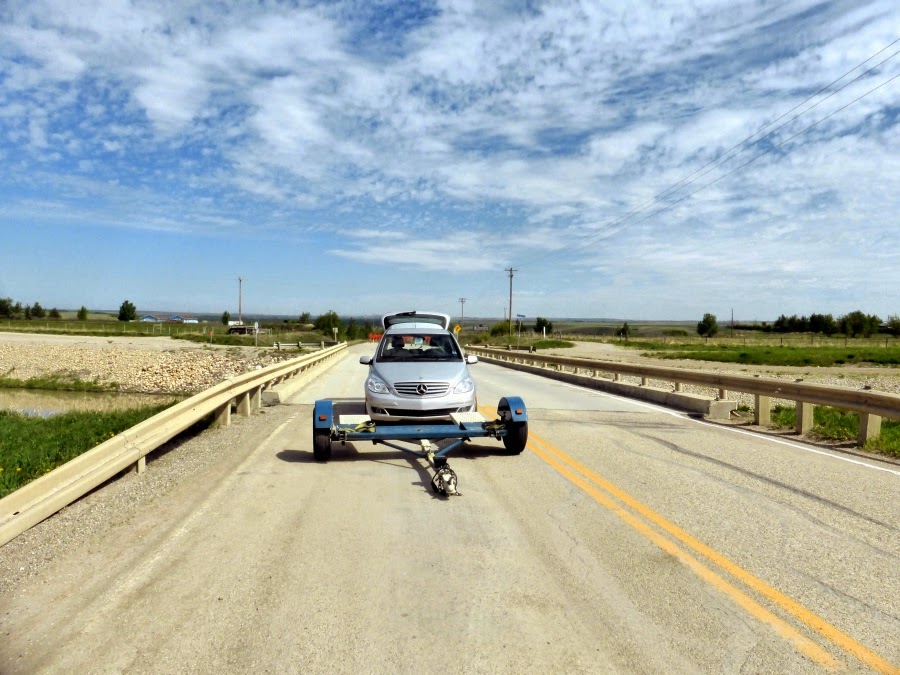 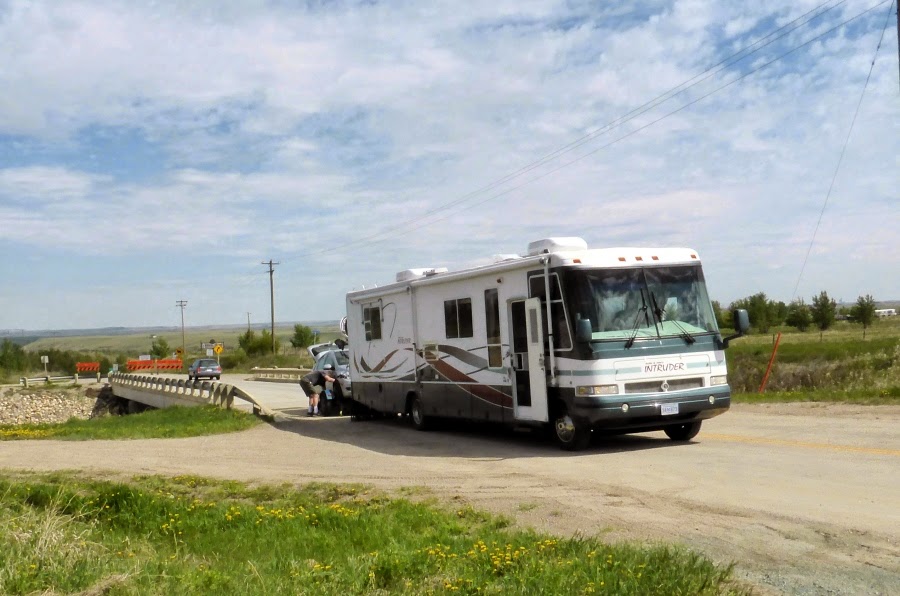 In the photo above you can see, behind us, another car that missed the detour sign. There were five or six cars that passed us and turned around. Obviously the road closed sign was not too visible.

Eventually we headed out again around a 100 km detour and were on our way . Here are some sights from the road:
I understand you can boondock here for the night. We decided against it as it is very close to the highway and therefore, very noisy.

The day we crossed Saskatchewan it was very rainy. But we still saw lots of grain elevators: 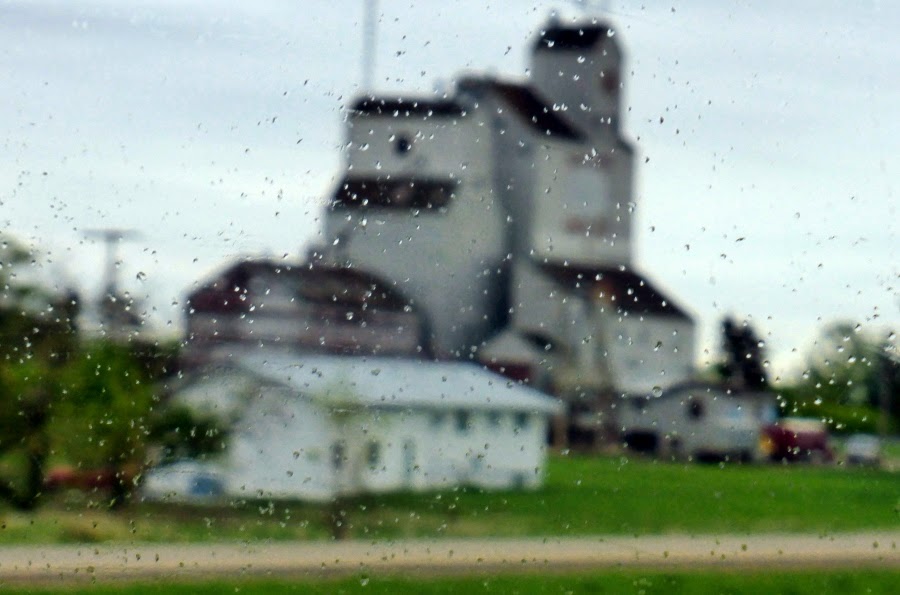 At one point we passed a man on a unicycle. I wanted to stop and find out what he was doing but the rain was pelting down and the wind was blowing it sideways so we decided against it. Later I "googled" him and learned he is cycling "across Canada" from BC to Ottawa to promote unity for climate change.

What struck me most about Saskatchewan was the amount of wetlands we crossed: 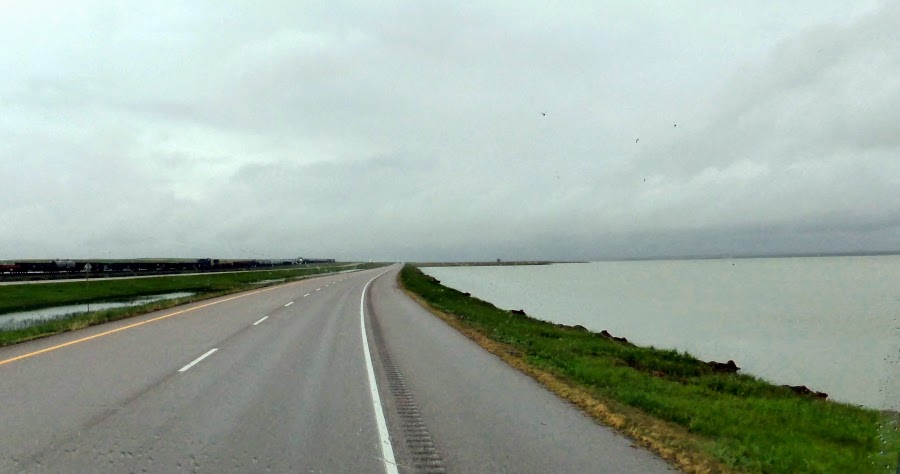 It is no wonder they get so much flooding in the spring rains. As you can see in the photo above the water comes right up to the Trans Canada Highway.

Saskatchewan is also home to the largest saline water lakes in Canada. This one is Chaplin Lake between Moose Jaw and Swift Current: 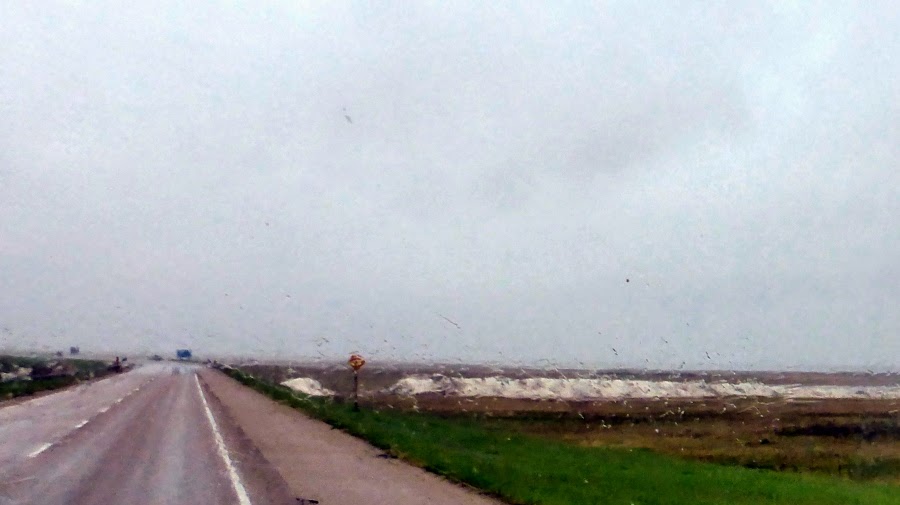 The rain makes it difficult to see but that is hills of salt, not snow, at the edge of the lake.

Manitoba was more of large farms and endless highway.

It took us four days to cross the Prairies and we missed a lot but decided not to stop as we were running very much behind schedule and we were due in London, Ontario on June 10 so we pushed on through. If we could go back we would take a day to visit Aberta's badlands, a day in Moose Jaw to visit the Al Capone tunnels, a couple of days checking out Saskatchewan's wetlands and Grasslands National Park and a couple of days at Lake Winnipeg. We missed a lot but that gives us a reason to go back some day.