Before I get to our day in Ottawa I want to tell you about a quick stop we made on our way from London to the Thousand Islands (I forgot to include it in my last post).

When we first started to think about the RV lifestyle one of the blogs I found (and continue to follow) was that of Mike and Dee White: GoneRVing. Eventually we became Facebook friends. (I love facebook, such a great way to keep up with friends in far flung places). When we were in Mission Texas this winter Dee noticed that they were close by and suggested we get together for coffee. She also told us about Ruth and Ken, fellow RVers and bloggers, who were staying at the same resort as we were. So one afternoon we all got together at our site for coffee and conversation:
Dee and Mike are full-timers who spend the summer at Musselman's Lake, north of Toronto and Ruth and Ken live nearby. (They are not ready to give up the "sticks" house yet).

So on our way to the Thousands Islands we made a detour to spend a night at the RV park where Mike and Dee are. Mike, Dee, Timmie, Ruth and Ken came to our RV for supper. Jackson stayed home - we missed him. 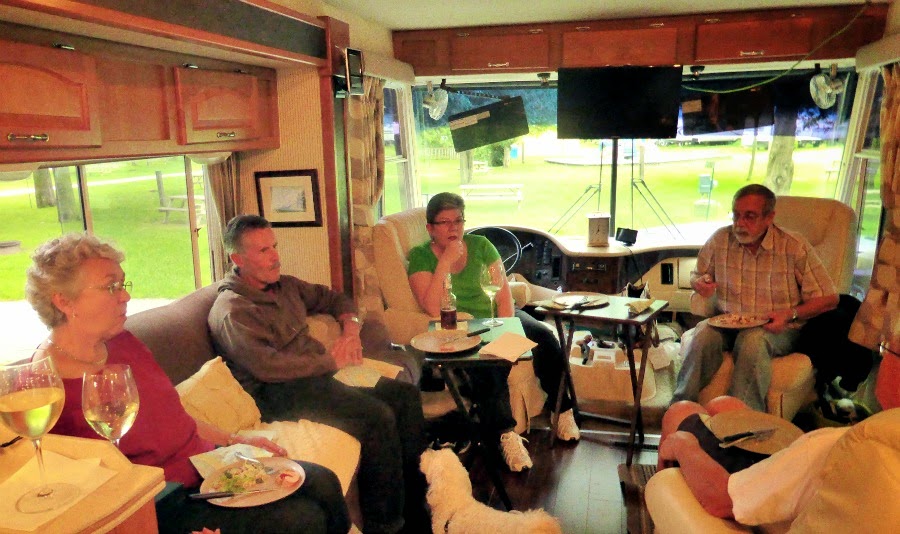 It was great to catch up with them in person.

Then on we went to The Thousand Islands and Ottawa"

It was a short drive from our campground in Gananogue to  the municipal campground in Ottawa and we arrived before lunch. And this is where our only mishap of the whole trip happened. The road to the campground was very rough and must have loosened something under the front end of our car. Which hooked into the dolly when he went to remove the car and tore the facia off. Arch made a temporary repair with duct tape (duct tape seems to fix everything) but we have a big bill in front of us I'm afraid.
Our campground in Ottawa was not far from where some of our college classmates were living so they dropped in for drinks later in the afternoon:
We attended university with Darlene, Sue and Don G (Don was in our class) - Don B joined the group when Sue chose to marry him. It is hard to believe that we will be returning to Montreal this October to celebrate the 50th Reunion of our class. Another lovely visit.

Our entire trip across Canada was timed so we could be in Ottawa on Canada Day so we were up bright and early July 1st to take the bus from a stop near our campground to downtown. Recommended - traffic downtown was a zoo. 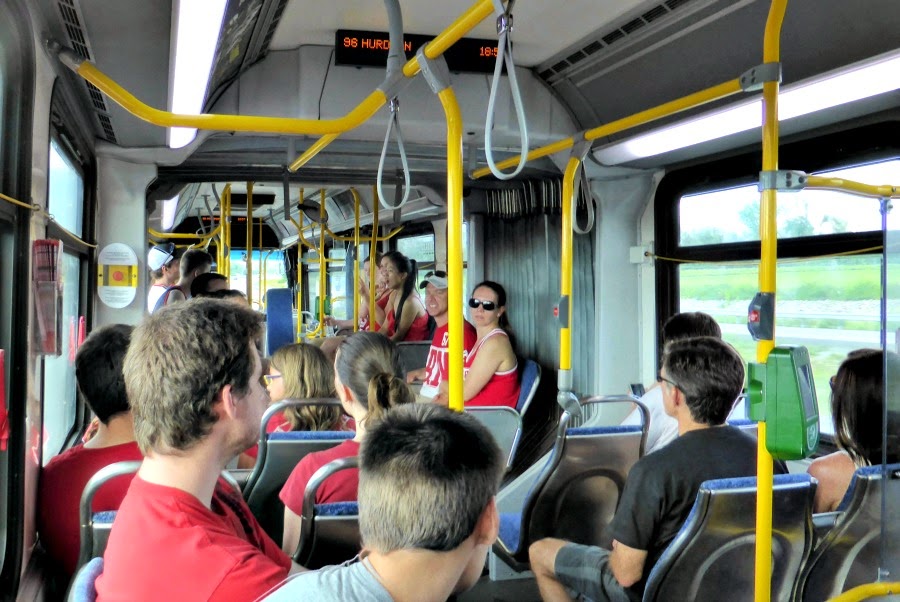 We visited Ottawa many times in the past and have been to all the major museums and attractions at one time or another but, The War Museum was recently moved to a new, much larger, building with a much improved exhibit space so we decided to spend the morning there.
The museum is Canada's national museum of military history and covers all facets of Canada's military past, from the first recorded instances of death by armed violence in Canadian history several hundred years ago to the country's most recent involvement in conflicts. I especially like that it did not glorify war and emphasized the human experience of war and the manner in which war has affected, and been affected by, Canadians' participation. Go if you are in Ottawa.

We spent 4 hours there and could have spent another 4 but it is a huge place and we did a lot of walking while there and were exhausted. So we had lunch in the museum's cafeteria - excellent by the way - and took the bus back to the Adventure Bus. For a rest and a change of clothes then back downtown for the celebrations on Parliament Hill: 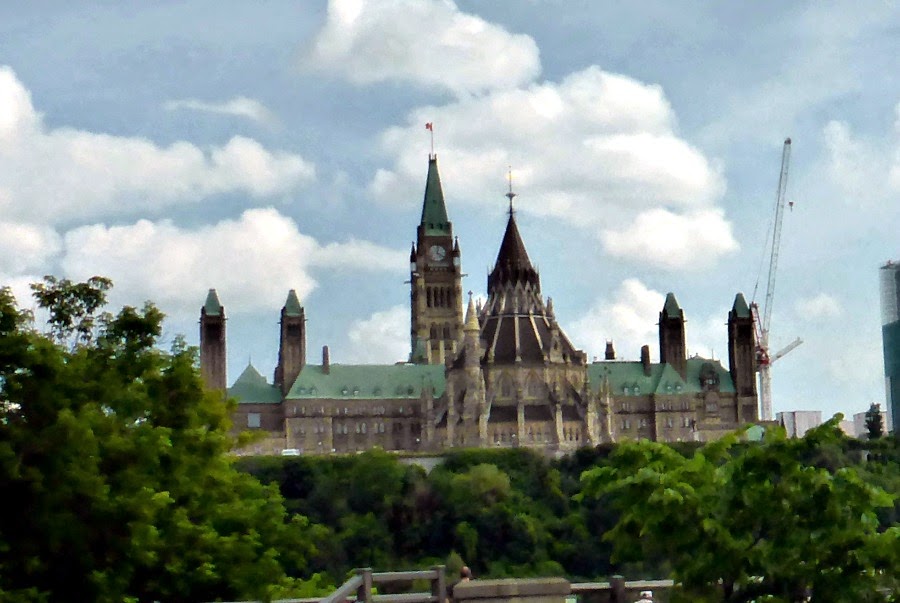 People were arriving from all points: 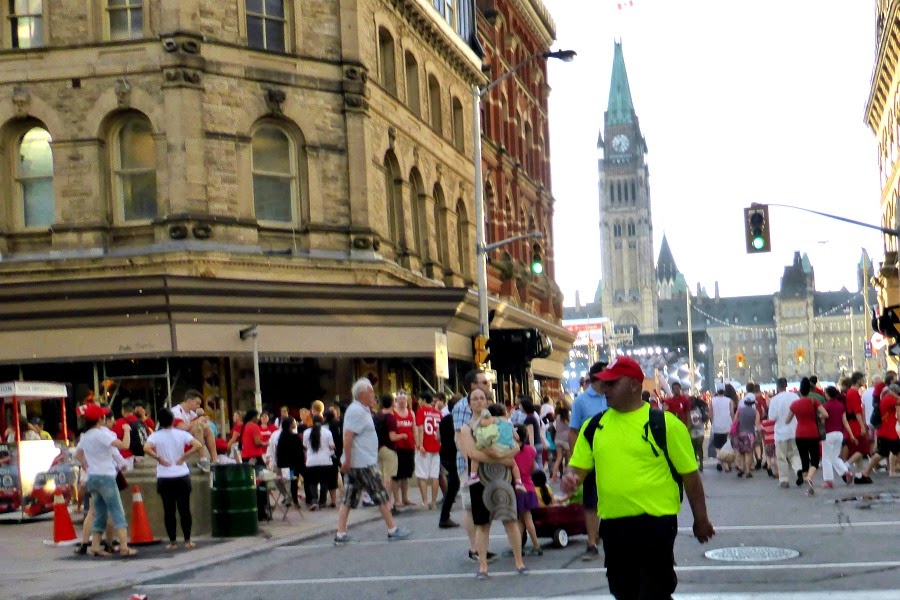 And The Hill was crowded: 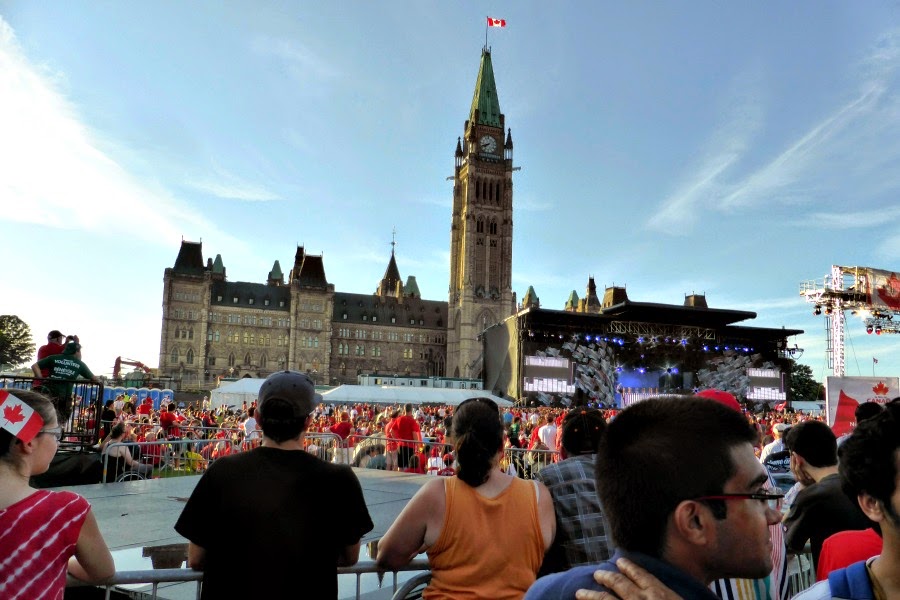 We found a grassy spot and settled in to watch the stage show and the people. The show on stage had entertainers representing all types of Canadian musicians. It was fantastic. But, of greater interest to me was the makeup of the audience. It is said that Canada is the most ethnically diverse country in the world and I believe it. Here are some photos of faces in the crowd: 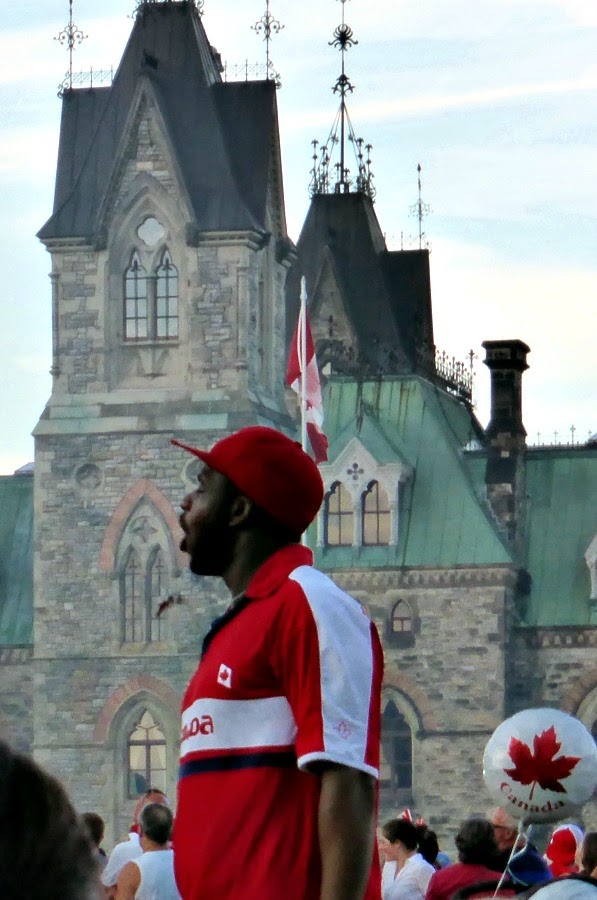 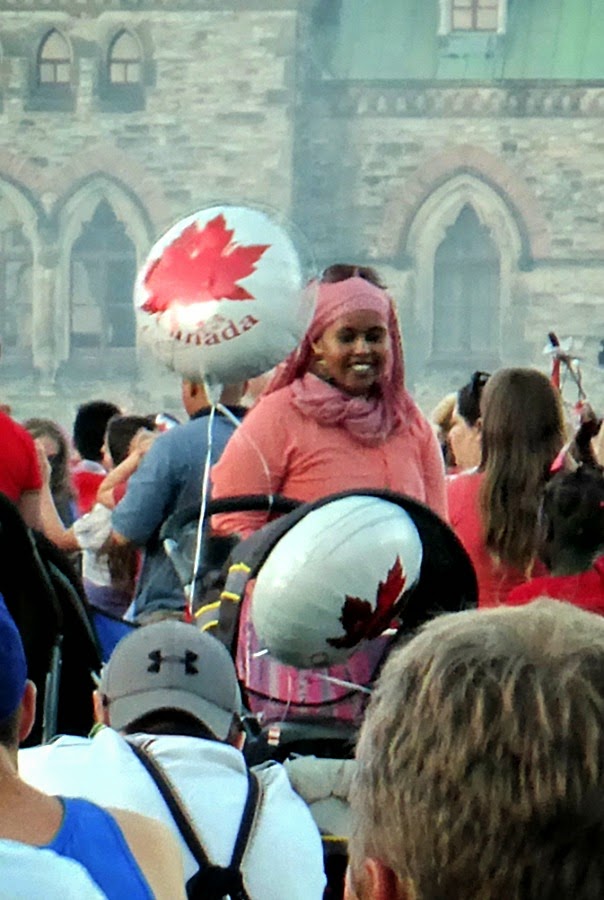 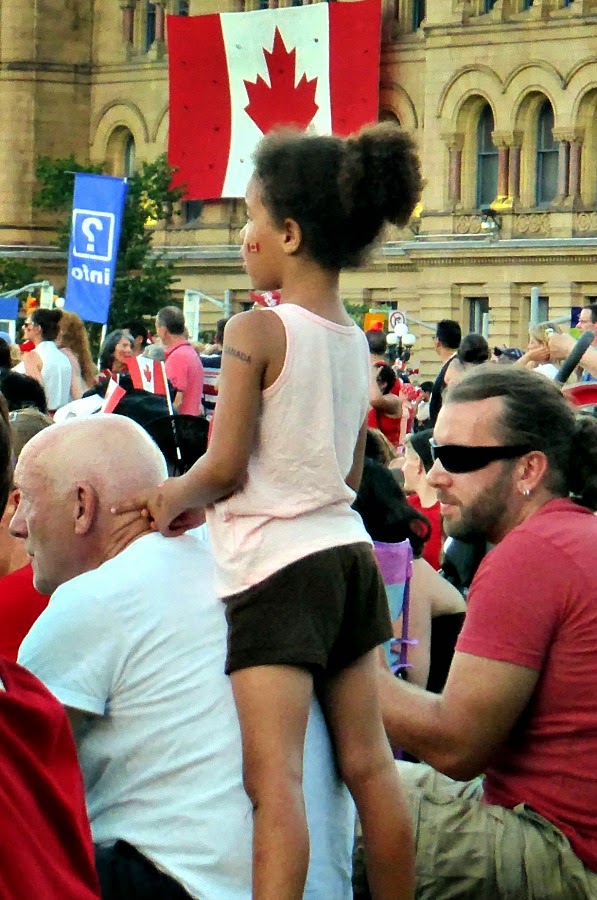 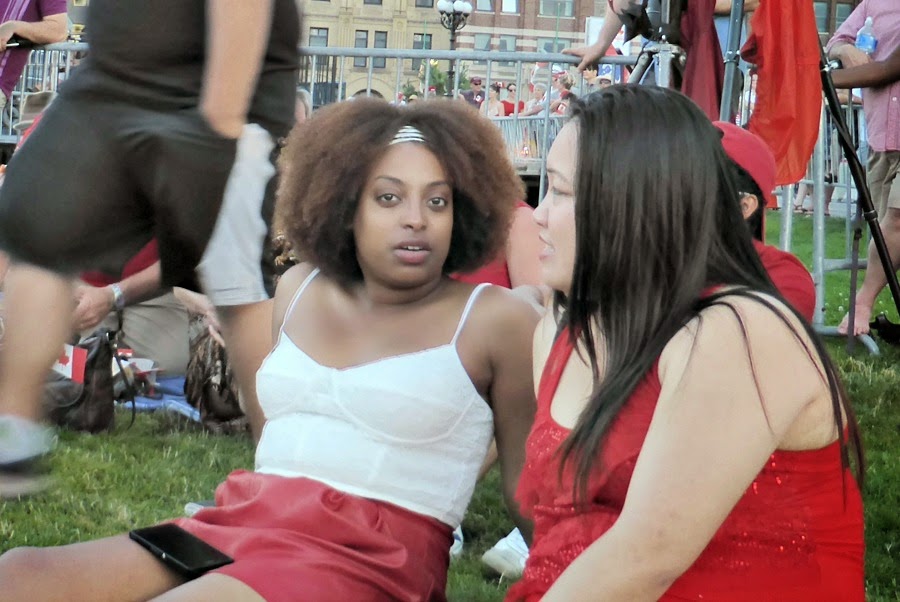 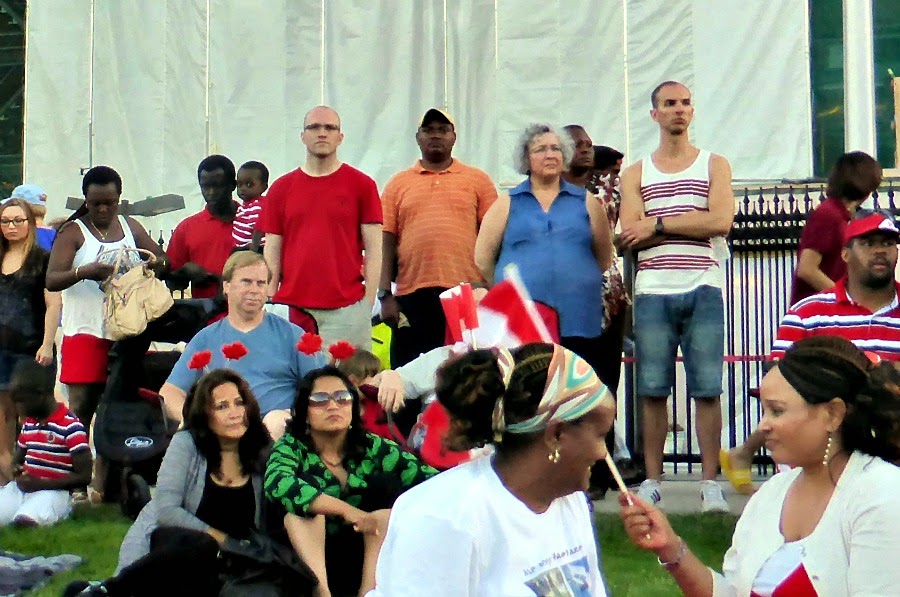 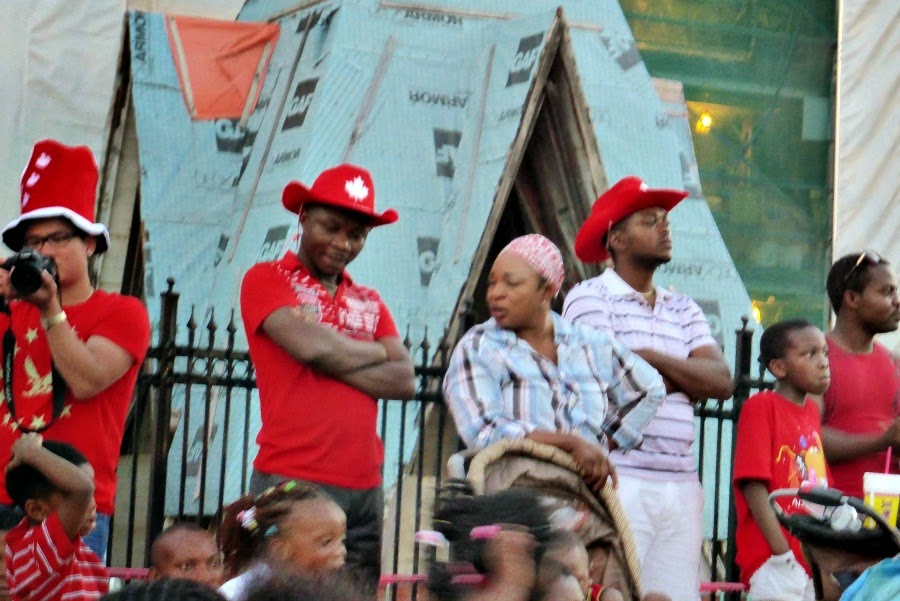 It is so great that so many people with such diverse origins have chosen to call Canada home.

As the stage show ended the sun set over the parliament buildings: 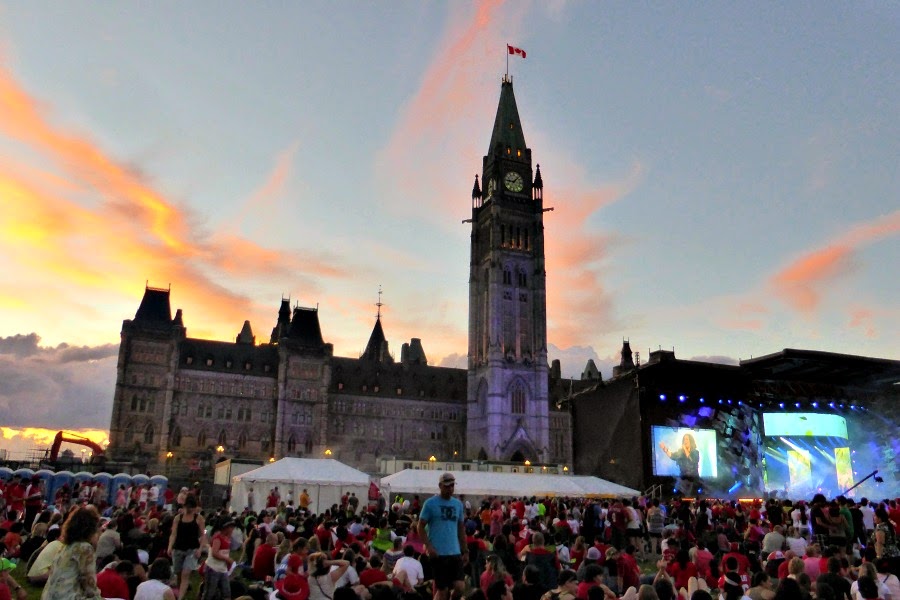 And the fireworks began: 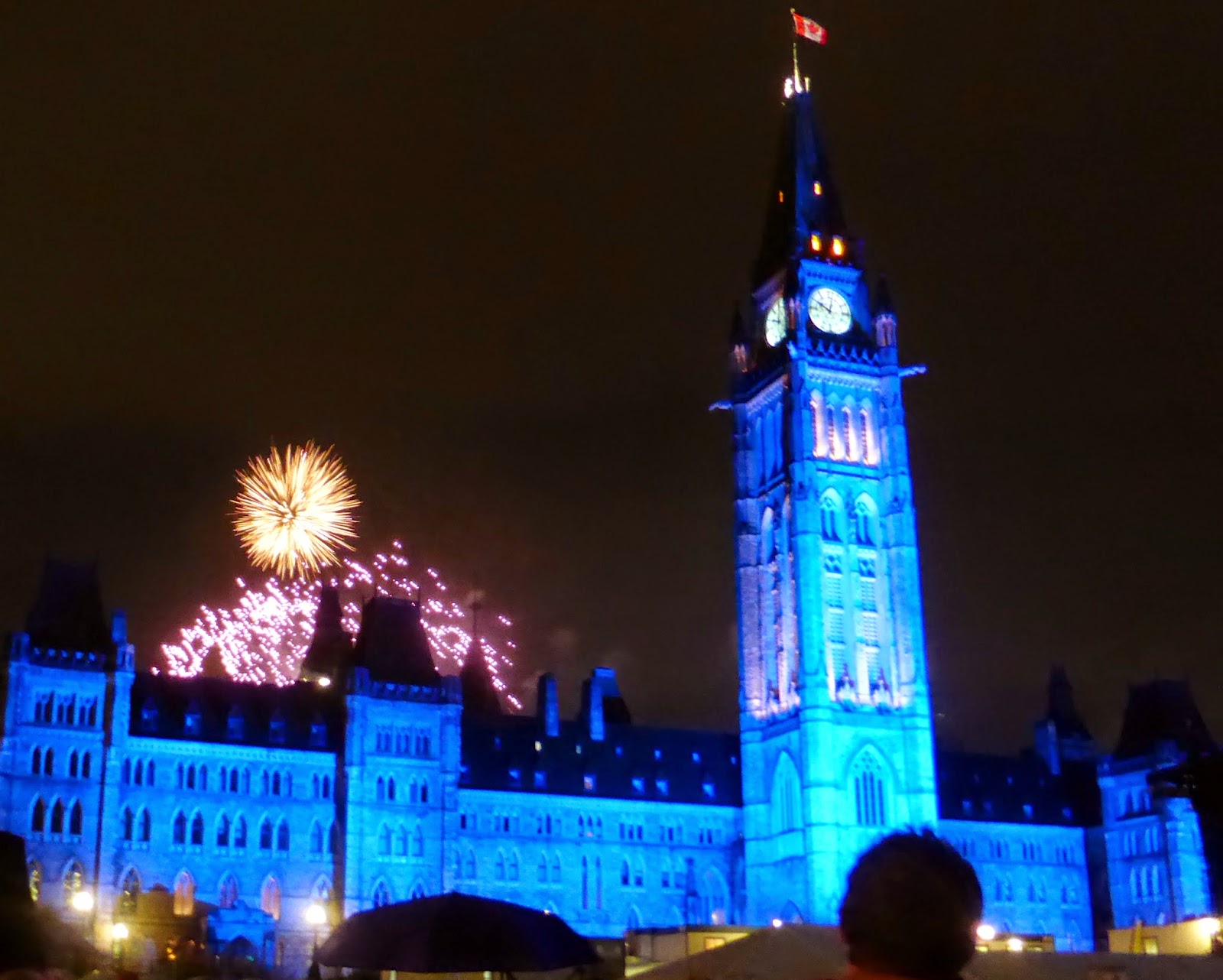 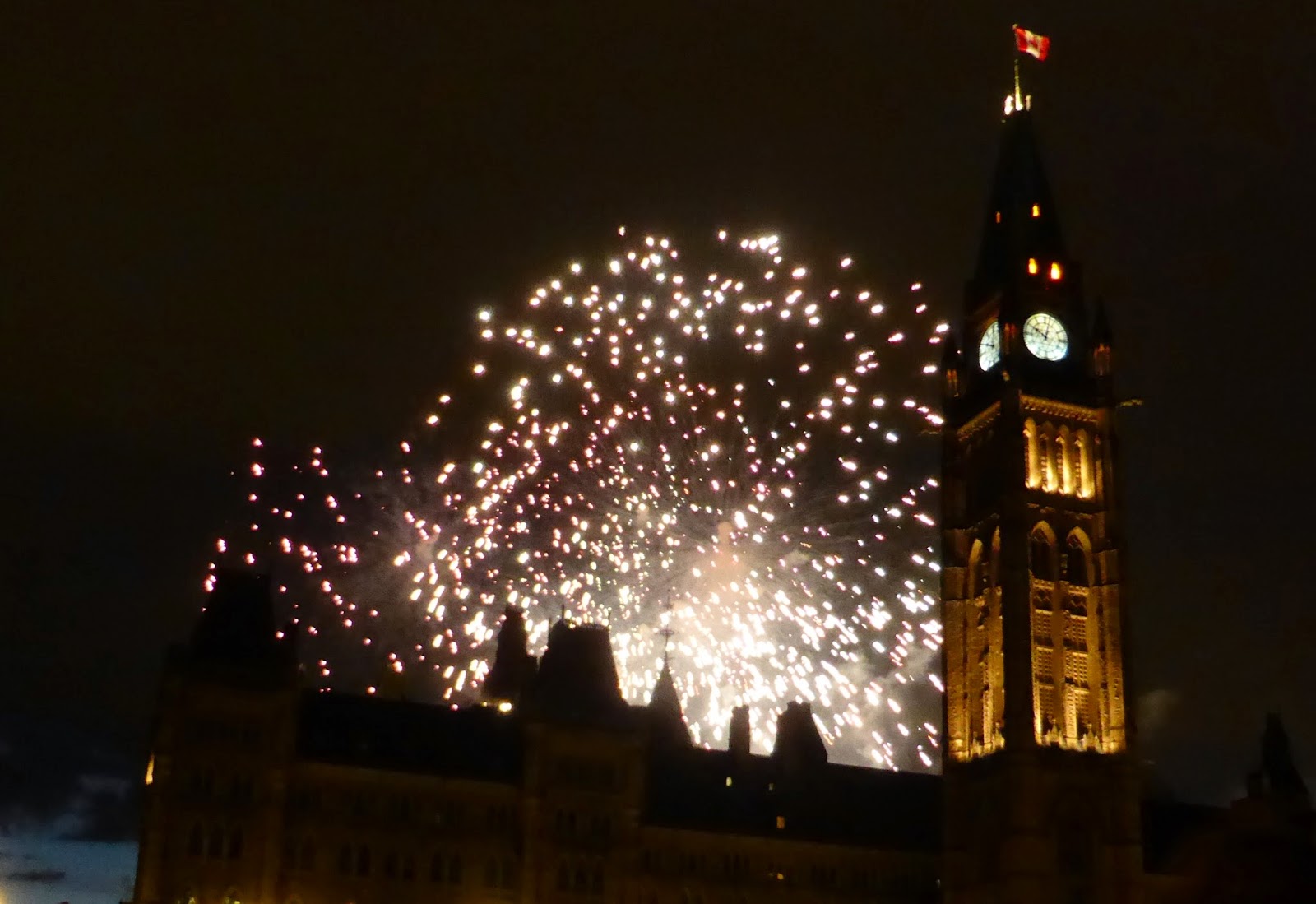 And then, as the fireworks ended, it started to rain and 350,000 people made a mad dash for home. And that is when we discovered to only disadvantage to taking the bus.
There was no organization to this. Buses for all destinations stopped in the same spot and you never knew which was going to open their doors where so people were running back and forth trying to get on the right one. Chaos. But we did get on the right bus and made it back to the campground unscathed.