When we were at the top of Salvation Mountain (I took the back path up - it was not too steep) we could see a lot of RVs parked in the desert:
The back story of Slab City is this:

During the 2nd World War the US Air Force established a base here. At the end of the war the base was declared extra to their needs and they offered to return the land to the county for the sum of $2. But. as with all abandoned military properties, the land was contaminated with all sorts of unwanted stuff that would cost millions to clean up. So the county said "no thanks". As did the state. And so the Air Force simply removed their equipment and buildings and left. Leaving many vacant concrete slabs scattered around the desert.

Eventually boondocking snowbirds discovered this area with the slabs perfect to park on. And for many years it served as the winter home for many northerners escaping winter's fury. As well as free living hippies and other folks escaping a conventional life.

However, as with all areas that are occupied by many people with no controls, problems started to crop up. As no governing body would take responsibility for the area it has no services (electric, water, sewer, garbage disposal, etc) and is self governed with no law enforcement. The nearby police departments do not enter the area thus it is ruled by vigilante justice.

It is, at times, a scary place, so many snowbirds stopped returning and the rest moved away from the core area of the slabs and into the suburbs, so to speak. So now, as with many Canadian and American cities, the core has become run down and scattered with garbage. But there is a core group of interesting folks who are trying to "revitalize" the place - on their own terms.

As we drove into Slab City we passed an empty "Welcome Centre: 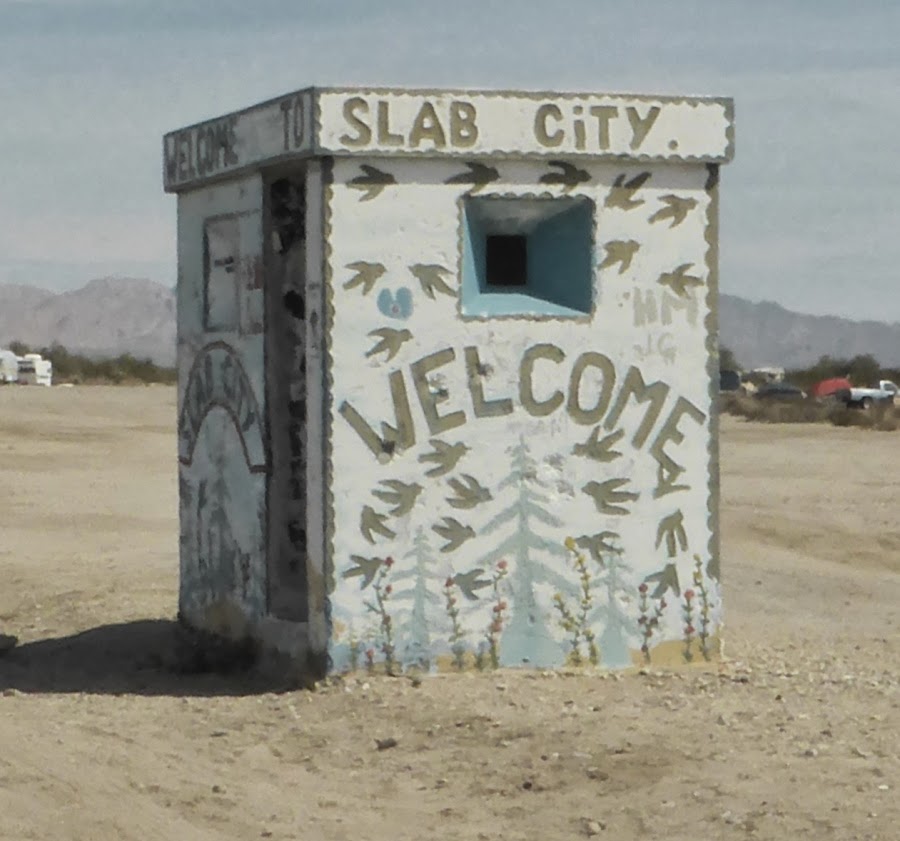 Lots of the garbage was collected by various people and turned into interesting pieces of art. I particularly liked this truck: 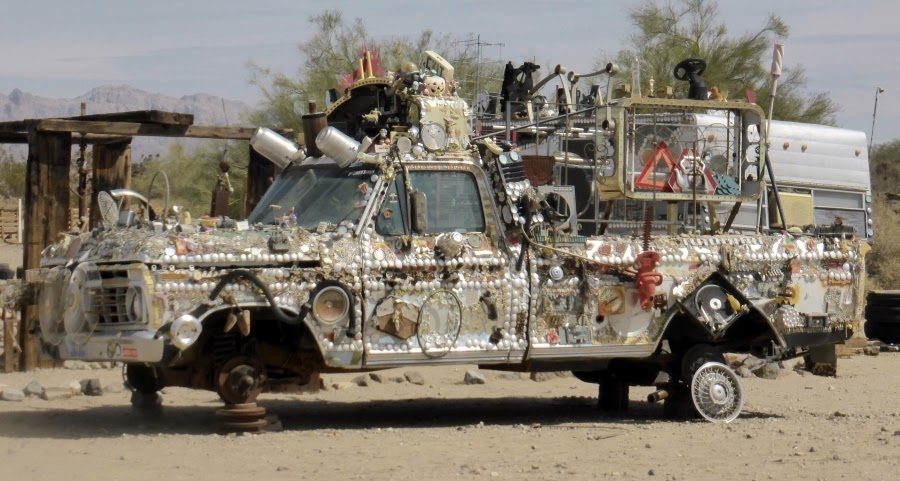 The folks at Salvation Mountain told us to go to the Internet Cafe and talk to Rob:
The owner, Rob, was an interesting character who traded an old truck for the cafe. Rob does not sell coffee or internet service for money but barters for things that he needs. Including a lot of marijuana. He also has a donation box. Most of the tables and chairs are repurposed items and scattered around the property.

As we were leaving the cafe we bumped into a woman - Hazel- from Halifax. She saw out car licence plate. She lives next door to the cafe and dedicates her time to arranging for the many free-running dogs and cats to be spayed and neutered. She has an arrangement with a local vet to do the work for a very low price, which she funds by collecting cans and bottles. And, she also has a donation box. Once a month, she picks up the animals from their owners, takes them to the vet to be spayed or neutered and returns them to the owners that night. It is a good thing she does on two levels - firstly she removes a lot of garbage by collecting cans and bottles and secondly she is helping control the pet population.

After wishing Hazel good luck and good by we drove around Slab City having a look at the various establishments and home sites.

And as we were leaving I couldn't resist photographing this sign:
We did not stay in Slab City. Not because we were fearful but because boondocking in the desert is just not our thing. Much to dirty and we like our electricity.